From the collection: Pass on after reading

Most posters from the Second World War emphasise the duty of civilians or soldiers to the nation. This poster looks beyond the nation’s immediate wartime needs to peacetime and the challenges faced by Royal Australian Air Force (RAAF) personnel returning to civilian life. 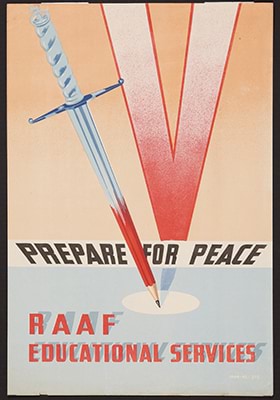 RAAF Educational Services was established in 1941 to meet this need through the provision of vocational training and, like that of Australian Army Education Services (AAES), was doubly conceived to play a larger role in ‘re-establishing the returning soldier into a changed society by providing a full range of educational activities at all levels and encouraging discussion of social, political and economic issues.’

Your part in the most extensive experiment in adult education ever attempted in Australia is a most important one. In the difficult days ahead, we will need clarity of vision, logical thought and honest assessment of values as we never needed them before.

The education services were not, however, without their detractors. Some felt that educational programs would divert time and resources away from more practical training, while others feared the schemes could be used to ferment socialist ideas and sympathies. To counter these criticisms supporters argued that the effort to educate defence personnel and foster within them a well-read and critical frame of mind was as vital an action in defence of democracy as combat operations against book burning fascists. Whatever their actual legacy, there is little doubt that the education services played a key role in defeating boredom, a threat to troop morale as great as that posed by any other enemy.

Toby Miller is Collections Coordinator at the Shrine of Remembrance