Originally installed in St Paul’s Church in Euroa in 1903, this unique stained glass window commemorates Private John Charlton, of Castle Creek, Victoria, for his service and sacrifice in the Boer War (1899-1901).

It was designed and manufactured in Melbourne by Brooks, Robinson & Co, in an Art Nouveau style.

The window features the helmet of St Paul superimposed over a sword of sacrifice and a shield. These emblems and the inscription below convey community beliefs in service to God in a just cause that led Australians to fight during the Boer War and the First World War.

This window had been replaced by another more figurative design in the 1920s, also dedicated to the memory of Private John Charlton. The original was stored under the church until being rediscovered in the 1980s.

The Charlton Memorial Window Committee, with support from a Victoria Remembers Grant, restored the stained glass window and donated it to the Shrine in 2016.

The Shrine gratefully acknowledges the generous support of The Copland Foundation towards the design and installation of the window. 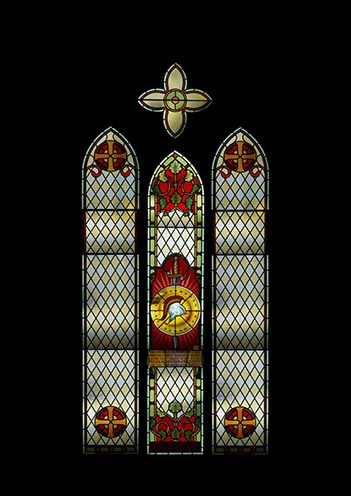