Blamey: The Commander in Chief

This article is an edited transcript of a speech given by Emeritus Professor David Horner at the Shrine of Remembrance on 26 July 2016. 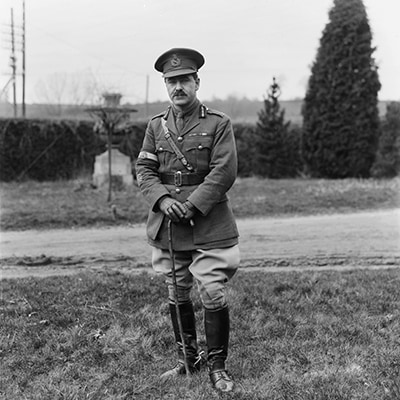 No other available officer of the general staff in the Australian divisions had anything approaching his experience. Apart from some possible doubt as to his possessing the necessary tact, there was never any question as to his suitability.

It is now eighteen years since I published Blamey: The Commander-in-Chief, and I would like to think that I was asked to open this exhibition because I attempted to assess his achievements as a commander, policy-adviser, strategist and administrator, without focusing on the many controversies that surrounded his life. In other words, I examined Blamey’s whole career and concluded that the achievements far outweigh any alleged shortcomings.

Field Marshal Sir Thomas Blamey was Australia’s greatest and most important soldier. Indeed, he was a major figure in Australian history. He was probably not Australia’s most accomplished battlefield commander, I am thinking here of men like Sir William Glasgow and George Vasey. He did not reshape the Australian Army and leave a new organisation as his legacy, Sir Edward Hutton is an example. Why then is he the only Australian to become a field marshal? Why has the Shrine of Remembrance decided to run this Exhibition?

The answer relates directly to Blamey’s military achievements in the Second World War, but his career included other outstanding achievements. In its first fifty years Australia suffered three great traumas in its national life—the two world wars and the Great Depression. Blamey played a major role in each. In the First World War he went ashore on the first morning at Gallipoli and was there in a senior position at the evacuation almost eight months later. He helped plan the Australian Army’s first battle on the Somme in 1916 and took part in the advance to the Hindenburg Line in 1917. The following year, as Lieutenant-General Sir John Monash’s chief of staff, he helped plan and direct the Australian Corps’ outstanding battles between August and October 1918.

After the war he administered the reorganisation of the Army and was closely involved in the development of the Singapore Strategy. He occupied senior commands in the militia when it formed the major part of the Army. He was Chief Commissioner of the Victoria Police at a time of social turmoil, particularly during the Depression.

Blamey held the Australian Army’s top position throughout the Second World War, and by any estimation, his command was a remarkable achievement. He led the Australian Imperial Force, initially in Australia and then in the Middle East, where it took part in five campaigns.

Then, for three years and eight months, from March 1942 to November 1945, he was Commander-in-Chief of the Australian Army, a time during which he carried a tremendous burden of responsibility. He commanded when Australia was under threat of invasion and in the counter-offensives against the Japanese. 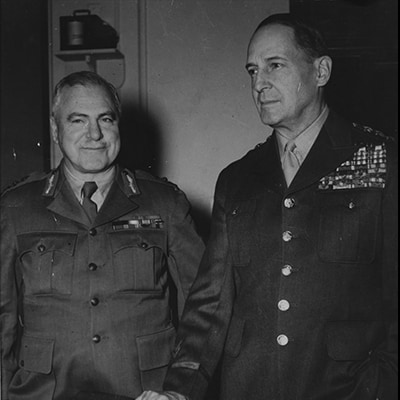 Blamey’s achievements took place on various levels. As Commander Allied Land Forces, under American General Douglas MacArthur, he was responsible for the land defence of Australia and for offensive operations planned by MacArthur. As Commander-in-Chief of the Army, he was responsible for the training, development and administration of an Army soon to exceed twelve divisions plus a multitude of training and base establishments. During this time the Australian Army reached its largest ever strength—over 500,000 personnel.

As the government’s chief military adviser Blamey advised the Prime Minister on high-level defence policy, and he accepted a further, self-imposed task. Both in the Middle East and in the South-West Pacific Area, Blamey worked within an Allied command structure, trying to protect Australia’s interests against the wider interests of its more powerful allies, particularly the United States.

Blamey lived in the era of great commanders and great wars. He was a contemporary of MacArthur, Eisenhower, Nimitz, Patton, Montgomery, Slim, Wavell and Alanbrooke. It was a time of revolutionary change in warfare. Born in the horse era, Blamey’s military career covered the introduction of indirect artillery fire, motor vehicles, tanks, planes, telephones, radios, chemical warfare, signals intelligence, radar, submarines, aircraft carriers and finally, nuclear weapons. He was born when New South Wales was a British colony and was old enough to be aware of Federation in 1901. When he died, Australian independence was unchallenged and all three Australian services had proud heritages of their own.

That era has now passed. It is unlikely that Australia will again have a commander of Blamey’s stature and influence. He was one of the major figures in establishing Australia’s first fifty years as an independent nation. The Australia that we know today was shaped largely by the experiences of the Second World War. Post-war policy makers were concerned to develop an independent capacity to make assessments about international affairs, to seek security within a wider framework of alliances while retaining an independent defence capability, and to build up a larger population and industrial base. These issues concerned Blamey and guided his conduct. They have also continued to concern policy-makers through to this day. In this respect, Blamey’s legacy has persisted well past his death, some 65 years ago.

I need to refer to some of the controversial aspects of Blamey’s career. This controversy is in three areas. The first relates to decisions made during his command on operations. In this area the criticism is not warranted. Under his command, the ANZAC Corps conducted a brilliant fighting withdrawal in Greece. His decision to demand relief of the Tobruk garrison proved wise. In particular, the New Guinea offensives in 1943 were a brilliant orchestration of the land, sea and air forces of two nations. They were the largest operations ever conducted by an Australian commander and they were highly successful. 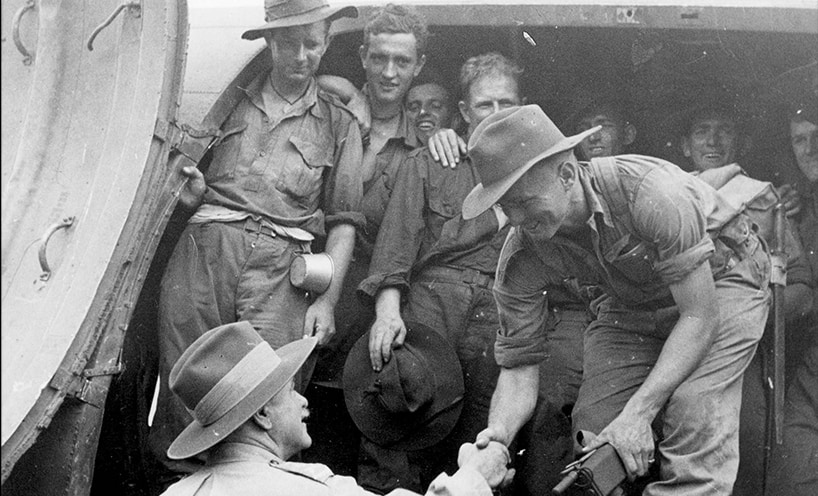 The second criticism revolves around the way Blamey ruthlessly fought to maintain his position as Commander-in-Chief against sniping from some politicians, journalists and subordinates. Fighting a world war, Blamey believed he was the best man for the job—and it is now clear that he was—and was quite right to work hard to maintain his position. Blamey was resilient—a key quality for a great commander.

The third area of criticism is levelled at Blamey’s character. The quote from Prime Minister Curtin— ‘when Blamey was appointed the Government was seeking a military leader not a Sunday School superintendent’—is well known. An Army’s leader must set an example with respect to values. Yet upstanding officers such as Edmund Herring, Iven Mackay and Ivan Dougherty retained their high regard for Blamey. It would be humbug and hypocrisy to suggest that all top military leaders should live blameless lives. The problem was that Blamey seemed to believe that his private conduct, such as—shock—horror—having a drink of whisky, would have no impact on the effectiveness of his command. I am reminded of President Abraham Lincoln’s reaction when told that General Ulysses Grant, his best general in the US Civil War, had been drinking whiskey. Lincoln told the critic to find out what brand of whiskey Grant was drinking and send a barrel of it to the other generals. As modern-day footballers often find, to their cost, they are expected to be role models off the field as well as on it.

We need to look beyond these alleged criticisms and remember that Blamey created and commanded an army that fought with skill and bravery in a score of campaigns. Some soldiers might not have liked him, but they followed Old Tom’s orders, confident of the outcome. As Jo Gullett, a distinguished junior officer of wide experience, put it:

It was Blamey’s gift that he was able to provide the Australian citizen soldier with the leadership, training and discipline to see this bitter task through to the end. It was his nature too that, devoted as he was to the soldier, he was never a loved or even very popular figure. . . But he was trusted and obeyed. 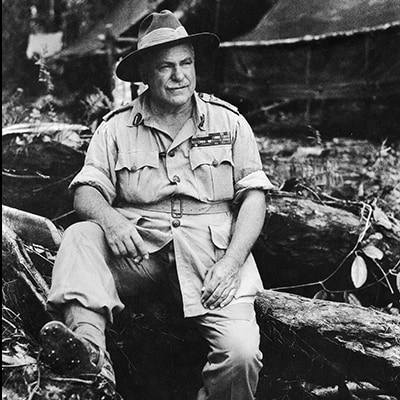 Blamey’s elevation to field marshal recognised his distinguished service in two world wars, but particularly his outstanding service to Australia in the Second World War. It was a tribute to Australia’s part in two world wars but it was more than that. It was a recognition that Australia was now an independent country. It would make its own decisions about its security, it would have a standing army of its own that could implement those decisions, and it could produce commanders who understood Australia’s own particular strategic situation. Blamey had played a major role in bringing about these developments. In that sense, his appointment as field marshal signified a coming of age of the nation and its army. No single person can claim to have brought about these outcomes, but Field Marshal Sir Thomas Blamey’s role had been more important than that of any other. The Shrine should be congratulated on playing a major role in bringing Blamey’s achievement to a modern audience.

Professor David Horner is an Official Historian and Professor of Australian Defence History at the Australian National University. He has written extensively about Field Marshal Blamey in works such as Blamey: The Commander in Chief (1998), High Command: Australia and Allied Strategy (1982), and Crisis of Command: Australian Generalship and the Japanese Threat (1978).