The Coldest War: Victorians in Korea 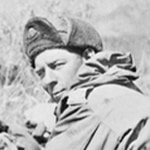 If not for the hill sloping away to the right of the image you might think that this was a photograph from the Great War—Australian soldiers evacuating a wounded comrade in the aftermath of the Western Front battles—but this is Korea in May 1953. The war has been in stalemate for almost two years, but savage fighting continues as the two sides jostle for better positions at the negotiating table. A recently launched exhibition at the Shrine explores the Korean War in detail, and it is timely that an article should examine the first ‘hot’ war that Australians were involved in during the Cold War, in which 17,000 Australians saw action in Korea. Many of them were veterans of the Second World War. This article highlights the stories of three Victorian servicemen.

Korea had been ruled by the Japanese from 1910 to 1945, and as the war ended Russian forces occupied the area to the north of the 38th Parallel and US forces the south. The US helped establish the Republic of Korea (ROK) while the USSR did the same in North Korea, known as the Democratic People’s Republic of Korea (DPRK). For most of the immediate post-war period all eyes were focussed on Europe, and by 1949 US military forces had withdrawn from the Korean peninsula.

Intermittent border clashes occurred but few expected the full-scale invasion that began on 25 June 1950 as seven divisions of North Korean troops poured over the border, rapidly capturing Seoul and driving southwards. On the day of the invasion, the United Nations Security Council met and passed a resolution calling on North Korea to cease hostilities and to withdraw north of the 38th Parallel. This did not happen and the UN resolved that member nations should provide forces to assist South Korea. Australia was the first nation after the US to provide elements of all three services to the conflict. As Australians had been serving as part of the British Commonwealth Occupation Force (BCOF) in Japan since February 1946, they were able to be deployed very quickly. Indeed, within days of the outbreak of war, the Australian destroyer HMAS Bataan was ordered to join a US Task Group undertaking escort duties in the Sea of Japan. Among her crew was a man who would eventually retire as Commodore Dacre Smyth, having served in the Royal Australian Navy (RAN) for almost 40 years. Born in England in 1923, his family migrated to Australia when he was a baby, settling in the Western Districts of Victoria. He finished his schooling at Geelong Grammar in 1940 and immediately joined the navy. He was posted to his first ship, the heavy cruiser HMAS Australia, so beginning a very eventful career, which would take him to every ocean and sea in which the RAN served. He escorted the first Anzac convoys which sailed to the Middle East in 1940, searched for German raiders in the Atlantic and Indian Oceans and, when the war against Japan broke out, escorted troops to New Guinea and participated in the Battle of the Coral Sea. Posted to England for further training in 1943 he saw action aboard motor gunboats in the English Channel and was one of the few Australians to take part in D-Day, when the cruiser he was attached to provided naval gunfire support off Sword Beach. Returning to Australia in late 1944, his ship joined the British Pacific Fleet, which meant he was involved in the campaigns which eventually defeated the Japanese, including the Philippines and Okinawa. Smyth was posted to the frigate HMAS Murchison in 1946 where he was involved in escorting the Australian BCOF contingent from Morotai to Japan. Soon thereafter he joined the destroyer Bataan and, after the Korean War broke out, spent many months engaged on the west coast of Korea in the Yalu Sea and on the east coast in the Sea of Japan. Bataan’s duties primarily involved naval gunfire support, escorting aircraft carriers—including HMAS Sydney—and the routine but important tasks of patrolling and blockading. Smyth experienced the bitterly cold winters that froze hands to metal and the towering seas which swamped even the largest of ships. Bataan left Korean waters in June 1951 and returned to Sydney. By February 1952 she was back on station, performing a similar range of duties as on her first Korean War tour. Smyth’s career continued after the Korean War ended with command of the frigate Hawkesbury and later the fleet replenishment vessel Supply during the Vietnam War. He finally retired from the navy in 1978.

Lieutenant Colonel Alfred Argent also had a very long and distinguished career, seeing action in both the Korean and Vietnam Wars before retiring in 1975. Born in the small Gippsland town of Lang Lang in 1927, he enlisted as an 18-year old in the Australian Army in May 1945. Completing recruit and Signal Corps training the following year he then began officer training, graduating from the Royal Military College, Duntroon in 1948. Argent joined the 67th Battalion in Japan where they were serving with BCOF. Soon thereafter they were renamed the 3rd Battalion, Royal Australian Regiment (3RAR). Ten days before the war began he was made battalion Intelligence Officer (IO). 3RAR needed to be brought up to strength and complete advanced training prior to deployment, so did not arrive in Korea until 30 September 1950. Within days of their arrival, however, they were in action and would be the only Australian Army unit to remain in Korea for the duration of the war. Members of the unit rotated home after their tour had finished but the battalion did not leave the country until November 1954, more than a year after the armistice. The first year of the war in Korea was very fluid, with advances and retreats of several hundred kilometres. 3RAR and their parent unit, the 27th British Commonwealth Infantry Brigade, were involved in almost constant action from September 1950 until June 1951. As the IO, Lieutenant Argent was closely involved in the planning and execution of all battalion moves and engagements in this period. His busy commanding officer (CO) Lieutenant Colonel Charles Green was constantly on the move, and Argent was under pressure to keep up with maps prepared, marked with known or suspected enemy unit’s positions and the locations and strengths of neighbouring Allied units. Critically, the decision-making of the CO is based on the IOs knowledge of the enemy and the battlefield.

On 25 November, the Chinese launched their massive ‘Second Phase Offensive’ leading to rapid retreats. The Commonwealth Brigade found themselves fighting multiple delaying actions over the next two months. This retreat is known to American forces as ‘the big bugout’, and on occasions the brigade found itself alone as units collapsed around them, withdrawing in disarray, often without warning. By January 1951 the Chinese offensive had been halted and over the next three months they were gradually pushed back into North Korea, until the Chinese launched their Spring Offensive on 22 April.

Over 23–25 April the Battle of Kapyong raged as a Chinese division was repulsed by 3RAR and the Canadian 2nd Battalion, Princess Patricia’s Light Infantry. The infantry companies were heavily pressed by repeated Chinese assaults; at battalion Headquarters, Argent and others worked to keep those in the front line supplied with ammunition and coordinate fire support and the evacuation of wounded. By late on the afternoon of 24 April the Australians were ordered to break contact and withdraw, inflicting more casualties on their attackers. Argent remained with 3RAR until July 1951 when he returned to Australia. He later transferred to the Army Aviation Corps and in the 1960s and early 1970s he was deployed to Vietnam twice, including a stint flying light observation aircraft when he was seconded to the US forces. After he left the army he was instrumental in Antarctic aviation with the Australian National Antarctic Research Expeditions.

In June 1950, No. 77 Squadron RAAF was preparing to return home from Japan as Australian commitments to BCOF were reduced. The squadron personnel were enjoying a farewell celebration when news arrived of the North Korean invasion. Quickly, the decision to return to Australia was rescinded and within days the P-51 Mustangs of the squadron were in action, providing fighter escort for United States Air Force bombing raids on the rapidly advancing communist forces. Soon their roles expanded to involve ground attacks, initially to slow the advance, and then to protect the very small Pusan perimeter in the south-east of the country—the only territory not overrun by the North Koreans. Although by 1950 Mustangs were obsolete for aerial combat, they were perfect for ground attack as they were slow and manoeuvrable, allowing them to deliver accurate and timely close air support to the beleaguered South Korean and American forces. Throughout the latter half of the year, they flew countless dangerous missions with many aircraft damaged by ground fire and others shot down with the loss of several aircrew, including their commanding officer, Wing Commander Lou Spence.

Soon to join No. 77 Squadron was Keith Meggs, a young sergeant pilot from Preston, Victoria. Born in 1928, as a teenager he had worked at the Commonwealth Aircraft Corporation factory in Port Melbourne during the Second World War, before beginning glider training in 1945. He attempted to volunteer for pilot training with the navy but was informed he was too short. Undeterred he joined the RAAF in 1948. Arriving in Korea in December 1950, within weeks he was flying combat operations.

March 1951 found him involved in the two most eventful engagements of his air force career. During a ground attack, his Mustang was badly damaged but he landed at Kimpo Airfield, Seoul without knowing whether it was held by friendly or enemy forces. Luckily it was still in the hands of the allies. Weeks later he was involved in a dramatic rescue when the pilot he was flying with was shot down. As the pilot—Sergeant Cecil Sly—had landed in enemy territory, Meggs and other pilots desperately launched strafing runs on the enemy to cover helicopters which were attempting to rescue Sly.

Soon after these incidents the squadron was withdrawn to Japan where it began conversion training to fly the British Gloster Meteor jetfighter. No. 77 Squadron returned to the fray three months later, but it was quickly apparent that their fighters were no match for the Russian built Mig-15 jets. It was therefore decided that the squadron should revert to the ground attack role for the rest of its deployment. After his combat service, Meggs went to fly Vampires and Sabres in Australia and Malta, before rejoining the Commonwealth Aircraft Corporation in 1957 and then spending time with the Department of Civil Aviation.

These are just three stories of those who served in a little remembered war but one that still has echoes today.

Dr Adrian Threlfall has been a member of the Shrine Education Team since 2011 and is a regular contributor to Remembrance. A military historian, he is currently working on a book about the combat operations of the Australian Army during the Cold War. Adrian’s first book, Jungle Warriors: From Tobruk to Kokoda and Beyond, and his second, Reg Saunders: An Indigenous War Hero, are available in the Shrine bookshop.