From the collection: Free speech for peace

Fifteen years, a world war and the Melbourne-Sydney divide separate them, yet these donations to the Shrine Collection share a connection. 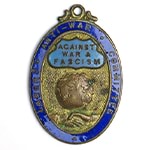 Among the artefacts held in the Shrine Collection from First World War veteran and Victorian Railway worker Arthur ‘Dick’ Reynolds, is a badge for the Labor Anti-War Committee Against War and Fascism. Free Speech for Peace, a post-Second World pamphlet recently donated to the Shrine, illuminate the ways divisions in the Australian political left eclipsed efforts to secure and maintain peace. 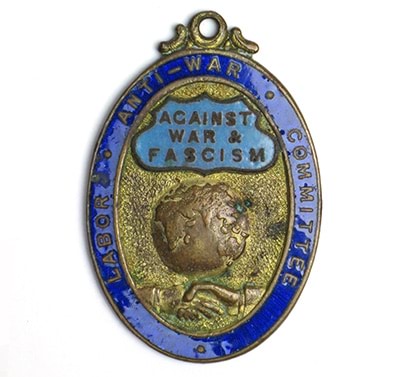 In 1934, the Communist Party of Australian (CPA) established the Movement Against War and Fascism (MAWF). Shared concern at the rise of fascism around the world and fears of another major war prompted many Australian Labor Party (ALP) and Trades Hall Council members to join. The ALP regarded this as an attempt by the CPA to infiltrate the Labor movement and, in 1935, the Victorian branch founded the Labor Anti-War Committee (LAWC) in direct opposition.

While ostensibly a movement for peace, LAWC was primarily a defence against ALP members being swayed toward the CPA through their MAWF membership. LAWC regarded war as a capitalist ploy to exploit the working classes and advocated for isolationism declaring:

MAWF, while agreeing with the anti-capitalist view of war, believed that Australia should be prepared to support anti-fascist forces wherever they were found. They are best known now for sponsoring the controversial visit of Egon Kisch, a prominent anti-fascist writer and activist, to Australia.

Support for LAWC was initially strong, but their lack of purpose soon became evident; throughout 1936 LAWC was in serious decline and by 1937 effectively ceased to operate. The struggle for working class allegiance, however continued.

In response to the horrors and loss of the Second World War and the threat of atomic warfare new peace movements flourished. In September 1949, the Australian Peace Council (Council) was launched in Melbourne ‘to campaign for world peace’. Membership included clergymen, trade unionists, returned servicemen, and such prominent Australians as feminist Jessie Street and the authors Frank Dalby Davison, Leonard Mann and Eleanor Dark. Their first major event was to organise an Australia wide Peace Week.

Once again, the ALP perceived a threat to their membership. In February 1950, the New South Wales executive declared the Council a Communist Party auxiliary and determined to disqualify ALP members who joined or assisted it in any way. In the lead up to this decision, in December 1949, the Labor-aligned Mayor of Sydney, Alderman O’Dea, refused to allow the Council to hold a peace rally at the Sydney Town Hall. Several unions called for a ‘black ban’ on the Mayor and his fellow aldermen, while the Council immediately countered by holding a rally at the nearby Sydney Radio Theatre. Characterising their work as ‘in defence of Australian Democracy’, the Council advertised the event as a ‘Free Speech for Peace’ rally. Pamphlets, such as those held by the Shrine, promulgated the ban as an attack on ‘precious liberties’.

Hostilities continued into the 1950s, with the Council even taking out newspaper advertisements denying they were run by the Communist Party.

These two artefacts illustrate how the tension between left wing elements in Australia, alike in their competition for members, overshadowed the much bigger challenge—how to ensure peace would prevail; they will be on display in the Peace gallery from July 2019.

Katrina Nicolson has been a Research Officer with the Shrine since 2011. She has worked on many special exhibitions including Indigenous Australians at War: from the Boer War to the Present and is co-curator of the Shrine’s travelling exhibition, Australia Will Be There: Victorians in the First World War (1914–19).