From the Collection: One Flag, A Tale of Two Empires 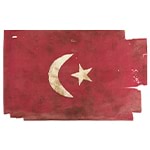 This Ottoman Empire flag was recovered by Trooper James Offord from the town of Beersheba following the 4th Light Horse Regiment’s mounted charge on 31 October 1917. Offord enlisted in the 4th Light Horse on 4 January 1916 and was a stretcher bearer during the battle, transporting wounded soldiers from the field of battle to the relative safety and care of medical officers.

The flag features an irregularly cut white fabric crescent moon and five-pointed star against a red (gules) background. While the use of these symbols predates modern Islamic iconography, their widespread adoption and dissemination during the 19th century as symbols of the Ottoman Empire’s Islamic Caliphate has given them an additional religious connotation which persists to this day. There are sections missing in the upper and lower left cantons as well as extensive damage and missing sections in the upper and lower cantons on the fly side. The fragile condition of the flag can be attributed to its age and provenance. It is not an unreasonable conjecture that some of the missing sections were taken by Offord’s fellow soldiers who wanted their own souvenir of the battle.

Due to the size of the flag and its makeshift nature, it is unlikely that it held any special regimental significance or that Offord removed it from a significant building or military post. It is more likely that a flag of this size would have been carried by an individual soldier in a company unit or displayed in the streets of Beersheba by local residents or traders. Despite its rudimentary construction, the symbolism of the flag as a marker of sovereignty would have been understood by soldiers on both sides. Such symbolism was evidently not lost on Offord who risked his life during the battle. Offord was awarded the Military Medal for showing ‘the greatest gallantry whilst attending to wounded men under very heavy rifle fire and machine gun fire.’

Beyond its personal connection to Offord, the flag tells the wider story of the decline of Empires in the aftermath of the First World War. The Ottoman Empire aligned with the Central Powers at the outbreak of war in the hope that this would lead to the modernisation and strengthening of its military. Their defeat resulted in the partitioning of the Ottoman Empire’s territories by the British, French and Italian Governments and the dissolution of the Ottoman Empire a few years later. While the new Republic of Turkey adopted the late Ottoman Flag with only minimal changes, what it represented was a new nation.

Like their Turkish counterparts, it is unlikely that any of the Australians who fought at Beersheba did so under the Australian flag as we recognise it today. Australians were surrounded by a mixture of flags and nationalistic bunting that emphasised Australia’s historical ties with Britain as much as the nation’s own burgeoning identity. It was not until the 1950s that the defaced blue ensign we recognise today became official. It then superseded the red ensign and Union Jack more commonly flown to represent Australian soldiers during the First World War.

Toby Miller is Collections Coordinator at the Shrine of Remembrance. He has provided research assistance for the exhibitions Nerves and Steel and The Soldiers’ XI. Prior to commencing at the Shrine, Toby worked as a curator at the National Gallery of Victoria specialising in contemporary Australian art.