From the Collection: Peace Celebrations 1919 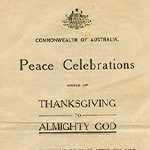 The signing of the Treaty of Versailles on 28 June 1919 formalised the end of the First World War (1914–18). King George V called for a United Service of Thanksgiving to be held at 3pm on the first Sunday of the peace, 6 July 1919, throughout the United Kingdom and all ‘her overseas dominions’. This would be followed by an official day of celebration on Saturday, 19 July. The British Empire had gone to war in concert and would commemorate the peace in like manner.

Australia wide commemorations were hampered by the harsh winter, shipping strikes, electricity shortages and the influenza epidemic. Victorians were encouraged to attend local services held in municipal or drill halls or their parish church. The exaltation at war’s end in November 1918 was forgotten by mid-1919 as the harsh realities of an impoverished post-war era created a peace characterised by disadvantage and hardship. Thousands, however, still attended these solemn services throughout the state as community and private grief continued to support the need for remembrance. The Shrine Collection holds both the Order of Thanksgiving booklet prepared by the Commonwealth Government as an official guide to these 6 July ceremonies and the Peace Celebration booklet, with printed lyrics for the patriotic songs to be sung on 19 July. The Government was determined to maintain a level of civility without degenerating into drunken violence, as had occurred at previous peace celebrations. This extended to the production of an order of service and specific printed suggestions as to the length of individual addresses and timing:

1. In order to secure unity throughout the Commonwealth, the Proclamation of Peace should be read and the National Anthem be sung precisely at half-past three. The Order of Thanksgiving was written for a united civil or ecumenical service, the hymns and form of prayers were familiar to all Christian denominations. The selection of hymns—All people that on earth do dwell, Jesus shall reign and Oh God our help in ages past—might speak, to modern and more secular perspectives, of the inherent conflict of praising an omniscient God who has simultaneously, for unknowable reasons, allowed the war to happen, and indeed been cited as a key motivator, brought victory and provided comfort for the bereaved. Kipling’s Recessional closed the program; his sonorous ‘Lest We Forget – Lest We Forget’ has become the refrain for ongoing remembrance.

The patriotic songs printed for 19 July included Rule Britannia and other old favourites of empire, accompanied by the new songs of the Australian Imperial Force: Australia Will Be There and Keep the home fires burning. Once again Recessional marked a solemn moment, when at 11am the triumphant marchers and crowd stood for two minutes silence to remember their dead.

The unity sought by the King and Commonwealth Government was to some extent achieved. Although Catholic and Jewish clergy did not participate in the main service of thanksgiving, special Masses were offered at St Patrick’s Cathedral and additional prayers added to the Sabbath services at the Bourke St Synagogue. The crowds who observed the march were generally well behaved, but the latter parts of the day were marred with violence. In the confusion some returned soldiers were arrested and one discharged soldier, James O’Connor, was shot and later died.

Katrina Nicolson is the Exhibitions Outreach and Grants Officer at the Shrine of Remembrance. She has worked on many special exhibitions including Indigenous Australians at War: from the Boer War to the Present and is co-curator of the Shrine’s travelling exhibition, Australia Will Be There: Victorians in the First World War (1914–19).