From the collection: unexplained photos 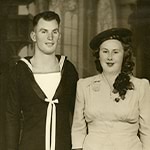 Doreen (née Gannon) and her husband Eric [De La] Fontaine were avid letter writers and met serving at Sydney’s newly commissioned HMAS Penguin (II) Naval Base in 1942. Eric had served three years with the Victorian Scottish Regiment, before enlisting in the Royal Australian Navy Reserves, aged 22. Doreen was independent, aged 25 and a Writer in the Women’s Royal Australian Naval Service (WRANS). Her plan was to travel to South Africa, where her grandfather had served during the Boer War (1899–1902). Those plans changed when she met Eric who had ‘a way’ about him and shared her love of novels. Their first date was to see the cinematic version of the novel The Moon and Sixpence. While courting, Eric and Doreen, chaperoned by Doreen’s younger sister, toured Sydney enthusiastically taking in the sites; both had a love of adventure. Engaged in October 1943, they were married on 18 March 1944 in Sydney. Eric presented his bride with a corsage of deep red roses, her favourite colour, whilst lamenting that the creases in his Navy uniform were not even.

Australia, along with other Australian ships, was attached to the United States Seventh Fleet during the Battle for Leyte Gulf in what was to be Eric’s first naval battle. Preparatory actions commenced on 20 October 1944. The following morning, during the dawn stand-to, a low flying Japanese aircraft under heavy fire passed up the port side of Australia and crashed into the foremast at 6.05am. There was a large explosion followed by an intense fire with burning fuel spraying the ship and men, including Eric, who received burns. That night his shipmate, Bill Harris, went to visit and found him cheerful, despite his bandaged hands. Knowing that Eric wrote often to his new wife, Bill offered to write a letter for him. Eric replied not to worry, as he would be ‘OK’ soon. The young men talked and Eric shared a photo of Doreen.

Eric passed away that night. He was buried at sea off the island of Palau in the Philippines, just a short seven months after marrying his Navy sweetheart, now a widow. During his brief service with Australia Eric sent Doreen nine photographs accompanied by a note, destroyed a long time ago, that said ‘I will tell you what they mean when I come home.’

Eric was one of 29 men aboard Australia who were killed or died of wounds, with a further 64 injured, in what is considered by many to be the first kamikaze attack on an Allied ship. Doreen went on to marry a widower with two sons and had a child of her own—daughter Patricia. In a gesture of remembrance Bill made contact with Doreen on 25 April 1989, 45 years after Eric’s death, and the two formed a close and enduring friendship.

Among other items donated to the Shrine collection by Patricia, were Eric and Doreen’s wedding portrait and the nine unidentified photos Eric posted to his wife. This generous donation allows us to look at the personal impact of this historic naval event through the experiences of two young Australian service personnel.

Jenna Blyth was Collections Manager at the Shrine of Remembrance, and former Assistant Curator. Jenna has over 14 years’ experience in sharing stories and caring for cultural materials at museums and galleries.