Disaster to Triumph: The Battle of Polygon Wood

The battle raged for hour after hour. Day became night, and still the ferocious fight continued.

This year is the centenary of the Battle of Polygon Wood, the second of the Australian Imperial Force’s (AIF) three step-by-step victories east of Ypres. It tends to be seen as an operation that went pretty much according to plan from a macro perspective, with a perfect barrage paving the way for a successful advance. Minor hiccups here and there were sorted out, and the battle was a sweeping success. That perception is flawed. It under-recognises what happened in the 15th Brigade AIF sector. What eventuated there was more than a minor hiccup.

The Australian-British assault was to be unleashed on 26 September 1917, with four AIF brigades in the centre and complementary advances by British brigades on both flanks. The 15th Brigade, commanded by Brigadier-General ‘Pompey’ Elliott, had the hardest task.

But the Germans anticipated what was coming, and sought to disrupt it with a pre-emptive assault. On the 25th they unleashed a bombardment of exceptional force on the 15th Brigade and the 98th British Brigade alongside. British intelligence later concluded that German artillery concentration had never been greater; the 58th Battalion AIF, occupying the front line in the 15th Brigade’s sector, had never endured such intense shellfire. It stood firm despite severe losses, but the adjacent British battalion was driven back appreciably and attacking Germans poured into the gap.

To retrieve the situation, Pompey Elliott sent forward the 60th Battalion and then the 57th, even though both units had important roles in the operation scheduled for the following day. The German shellfire was relentless, and 15th Brigade losses continued to mount. Big shells ‘roared and moaned incessantly’ and ‘ragged iron whirled and burred’, wrote W H Downing of the 57th. ‘There were on all sides the groans and the wailing of mangled men’, and bodies ‘living and dead were buried, tossed up, and the torn fragments buried again.’

Meanwhile Elliott’s direction of the fight was being hampered by inaccurate information from the British, who claimed they had regained their front line. Pompey knew this was incorrect, and eventually concluded that the 98th Brigade had no idea of the state of affairs on their front, or even where their units were.

Elliott strongly recommended to his superiors that his brigade was in no shape to carry out its vital role in the scheduled attack the following morning. Three of his four battalions had suffered heavy losses. Nearly all the specially trained guides had become casualties. Ammunition dumps had been destroyed. Various other attack preparations had been disrupted. Furthermore, the British on his right had not regained their front line, so any advance from his brigade’s sector would encounter enfilade fire from that flank.

Elliott was directed, nevertheless, to carry out the attack. He was appalled. It was with ‘the utmost anxiety’ that he proceeded to overhaul the arrangements. He was given two battalions from the 8th Brigade to use in the attack instead of the 57th and 60th, and he was assured that the British would regain their front line overnight and then advance alongside his brigade. Pompey remained sceptical that this would happen, and he was completely vindicated because it didn’t happen.

What did happen during that strenuous and stressful night of 25–26 September was that Elliott’s men adapted capably to roles different from those they had expected. The 59th Battalion, having assiduously practised the second part of the operation, smoothly adjusted to being directed to carry out the first phase. Everyone - including the borrowed battalions unfamiliar with the area - was guided into position for the attack before zero hour. 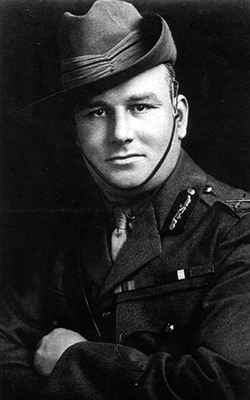 Pompey was understandably gratified by this outstanding display of brigade cohesion, but remained concerned about developments on the right. Here the news was very different. Despite all the assurances he had received, the British had not even come close to regaining their front line. The 15th Brigade would therefore be acutely vulnerable to enemy fire from the right during the attack.

Indeed, five of the six officers in the 59th Battalion’s leading companies were hit, including Lieutenant Jack Turnour, a 24-year-old Bendigo theological student who had been an original Anzac. Turnour had been wounded several times but urged Elliott to allow him to lead his company into this fight. During the advance, when Turnour’s men were held up by a crucial enemy pillbox, he positioned them on either side and himself directly in front, and then charged it. Monopolising the attention of the enemy, he was fatally riddled with bullets, but his selfless gallantry enabled his men to capture the pillbox, which paved the way for the encirclement and capture of other pillboxes. The 59th Battalion, despite its losses, reported that it had reached its objective on time.

The borrowed battalions from the 8th Brigade, the 29th and 31st, were to carry out the second phase, but their commanders, deterred by the alarming gap on the right caused by the non-arrival of the British, declined to advance. When Elliott became aware of this, he issued peremptory orders directing them to get forward, even threatening to replace them with other commanders. Meanwhile a British unit, the 2nd royal Welch Fusiliers, was sent up through the 15th Brigade’s sector to deal with the problem on the right.

Lethal enemy resistance continued, from artillery and machine-guns in particular. The battle raged for hour after hour. Day became night, and still the ferocious fight continued. Elliott learned that his brother had been fatally wounded nearby but could not go to him because he had to direct the complex battle. Eventually Pompey decided that the conflicting messages he was receiving from forward positions warranted a front-line inspection of his own. Ignoring warnings that it was too dangerous, he set off from his headquarters early on 27 September.

‘I never saw such a scene of confusion, men of all regiments mixed up all over the place’, he wrote afterwards. But he quickly discerned that a sweeping success was within reach and some apt reorganisation and judicious pressure could achieve it. He clarified the situation, revived the attacking impetus, allocated specific tasks and his men proceeded to attain not only his brigade’s objectives but those of the British alongside as well. Grave adversity had become stunning victory. Afterwards Elliott compiled a frank, forthright and comprehensive report on the battle, but it was suppressed by his British corps commander.

Pompey’s characteristic front-line intervention did not surprise his men, but British soldiers who saw him so far forward were amazed. One wrote that it was the only time in the whole war that he saw a brigadier in the front line. Another British officer marvelled not only at the unique spectacle of a senior commander in the shelled zone with the acumen and authority to resolve difficulties on the spot. He was also astonished that Pompey had told British officers that he knew there were hardly any Germans in front of them because he had ‘been to look’ himself.

Elliott’s leadership was also prominent in a similarly dramatic transformation at Villers-Bretonneux seven months later. Those familiar with the significance of Villers-Bretonneux in the climax of the war tend to presume that it was Pompey’s greatest achievement. But Charles Bean, the Australian official correspondent and historian, concluded that he had been even more meritorious at Polygon Wood, where his brigade ‘snatched complete success from an almost desperate situation on the right.’

Dr Ross McMullin is an historian of Australian military history. His biography of Pompey Elliott won awards for biography and literature, and his multi-biography Farewell, Dear People was awarded the Prime Minister’s Prize for Australian History. His new book Pompey Elliott at War is scheduled for publication in 2017.