This collaborative work of art comprises enamelled floral emblems of remembrance, inspired by those found on the battlefield and at home. Nothing symbolises the grief and loss of the First World War to Australians more than the common red poppy. The flower, which bloomed en masse across the devastated wastelands of the Western Front, became an emblem of remembrance as early as 1921. Artificial poppies designed to be worn on the lapel were sold in Britain and Australia to raise money for veterans and French children in the lead up to Armistice Day, now known as Remembrance Day. In France, the cornflower, rather than the poppy, became the primary emblem of remembrance as the flower’s delicate blue evoked the colour of the French military uniform.

Throughout the war, soldiers and civilians used native plants and wild flowers to commemorate those who had died. Plants that had traditional associations for remembrance and commemoration such as laurel, rosemary and violet, were readily incorporated into First World War emblems and rituals, while other plants and flowers served as reminders of life beyond the upheavals of war. As incongruous as the association of war and flowers may at times seem, the symbolism of floral emblems was central to the culture of military commemoration in Australia and elsewhere. rather than replacing the traditional floral emblems of commemoration and remembrance—laurel and rosemary—the cornflower and the poppy imbued First World War remembrance with a time and place.

The rich history of flowers and First World War commemoration is the point of departure for a collaborative work of art by Kirsten Haydon (New Zealand), Elizabeth Turrell (United Kingdom) and Neil Haslem (Australia) that will be displayed at the Shrine of remembrance to mark the centenary of the armistice. Titled Flowers of war, the exhibition features over 400 brooches, each in the shape of a single leaf or flower. Each has been painstakingly enamelled and assembled to form a commemorative wreath measuring two metres in diameter. Several of the brooches are decorated with fragmentary details of a soldier’s life. Other brooches are decorated with rich enamel glazes that highlight the natural beauty of the floral form. Extending beyond the traditional emblems of remembrance, the artists’ selection of plant forms include examples of less ceremonious leaves and flowers. Flora common to the battlefields of Europe and the Middle East appear alongside native leaves and flowers representing the United Kingdom, Australia, New Zealand and Canada. 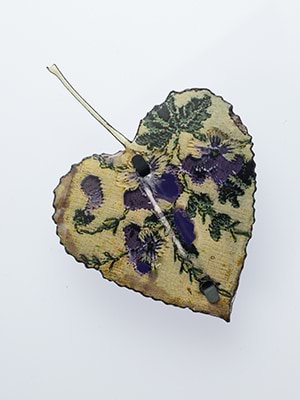 The exhibition is the endpoint of a collaboration that began four years ago through a shared interest in design, jewellery making and stories of First World War veterans recorded in community archives and museums. Starting with these stories and artefacts, the artists began collecting individual floral specimens from First World War historical sites in Europe and elsewhere. Many specimens were collected from the roadside around Villers-Bretonneux in the Somme, France on 25 April 2015, following the Anzac Day service. Over the course of the project other flowers and leaves emerged as fitting emblems as Haydon, Turrell and Haslem delved further into the histories they were researching. This wreath is not the sort laid by dignitaries on occasions such as Remembrance Day and it is worth remarking on the different ways in which the symbolism of the wreath addresses its audience. Unlike a traditional wreath of laurel or poppies, Flowers of war has no single organising principle apart from its shape. Any attempt to fasten upon its components reveals a farrago of location and dislocation, story and fragment, nature and denaturalisation.

At one level, we can read here the disruption and dislocation wrought upon individuals and communities by the First World War, the longing for safety and return for which so many floral symbols appear to stand. At another level, it is our community reflected in the assemblage of shapes, stories and forms that constitute the wreath. A community that has been brought together by history and circumstance. Today, we are held together less by a shared experience, such as that of the First World War, and more through a shared understanding of the traditions we observe on Remembrance Day and Anzac Day. A hundred years on from the Armistice of 1918 the language of flowers still speaks to us.

Flowers of War has previously been exhibited as a work in progress at Royal West of England Academy in Bristol, United Kingdom and the Canterbury Museum in Christchurch, New Zealand. The exhibition in the Shrine’s Galleries will be the first time the completed wreath will be displayed. Toby Miller is Collections Coordinator at the Shrine of Remembrance. He has provided research assistance for the exhibitions Nerves and Steel and The Soldiers’ XI. Prior to commencing at the Shrine, Toby worked as a curator at the National Gallery of Victoria specialising in contemporary Australian art.