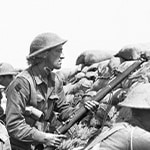 The men of the Australian Imperial Force (AIF) who alighted from troop ships at Marseilles, France in March 1916 were not professional soldiers, as we imagine soldiers today, but civilians who had volunteered to serve ‘King and Empire’ for the duration of hostilities. Hard-won battle experience at Gallipoli, coupled with a desire to prove themselves on the world stage, had secured these men a reputation for valour and initiative. Now they were to fight on the war’s decisive battlefront against the Empire’s most dangerous enemy—Germany. They felt they were well prepared for whatever lay ahead. They were wrong.

The men had come from Egypt where veteran units from Gallipoli had been divided up and the cadres re-stocked with reinforcements from Australia. Twenty-eight veteran battalions became 48, and two AIF divisions—the 1st and 2nd—were joined by two more—the 4th and the 5th. The 3rd Division, newly raised in Australia, would not arrive on the Western Front until November 1916. Its men at least would be spared the terrible ordeals of 1916.

From Marseilles the men travelled north to ‘The Nursery’ sector near Armentières, to ‘acclimatise’ to conditions on the Western Front. They found desolation— featureless terrain devoid of cover and bare earth which became quagmire when the rain came. Soldiers sheltered from the elements and enemy shells in miserable dugouts, walked duckboard lined trenches, and hopped from one mud-filled shell hole to another. In some sections of the line, trenches could not be dug. High water tables necessitated breastworks of piled sandbags instead. Rats and lice, and foul smells—of stale food, body odour, urine, excrement and decomposing bodies—were constant companions.

The greatest adjustment for veteran Anzacs, however, was the preponderance of heavy artillery. At Gallipoli relatively small numbers of guns had fired intermittently—fighting was dominated by hand-to-hand combat. In France, countless batteries of howitzers, guns, and mortars lay at regular intervals across the entire length of the Western Front. Either side could create a maelstrom before any threatened section of the line. During major offensives, even more guns could be brought to bear. Two thirds of all casualties during the war were caused by artillery. Australians at Armentières conducted trench raids and experienced enemy sniping and artillery strikes. Official Correspondent Charles Bean noted that the average Australian ‘recognised that, brave and stubborn though the individual Turkish had been, the German with his extraordinary powers of application and organisation was an opponent infinitely more formidable.’ ‘The Nursery’ would claim 600 Australian lives before the men began transferring to the Somme River Valley in June 1916.

British and French generals had selected the Somme River in Picardy for a joint summer offensive months earlier but vast French losses 300 km further south at Verdun (21 February − 20 December 1916) ensured that the ‘the big push’ would be a primarily British affair. Most formations were ‘Kitchener Army’ divisions raised from the millions of earnest volunteers who had jostled to enlist at war’s outset. The 141-day Battle of the Somme (1 July − 18 November 1916), their combat debut, has become a byword for muddy, bloody futility ever since. Britain suffered a staggering 57,470 casualties on the first day alone, including 19,240 men killed. In four and a half months the allies and Germans would suffer combined casualties of over one million men. The Australians did not fight their first Western Front battle on the Somme, but 90 kilometres north in the relatively inactive Fromelles sector. The 5th Australian Division and the 61st British Division were selected to launch a diversionary attack here to deter the Germans from transferring men south. Brigadier General Harold ‘Pompey’ Elliott, commander of the Victorian 15th Brigade, looked towards the main objective—the Sugarloaf, an elevated concrete bastion bristling with machineguns, 400 metres distant—and foresaw a bloodbath. His attempts to convince superiors to forestall the attack failed and at 6pm on 19 July 1916, Australian and British soldiers made the long dash across open fields towards the Sugarloaf. Small sections of the German trenches on the left flank were captured by the 8th and 14th Australian Brigades with heavy losses but British troops on the right, and Elliott’s 15th Brigade in the centre, were cut to pieces by machine-gun fire. The survivors had no choice but to withdraw to their pre-attack positions. A 59th Battalion corporal, Hugh Knyvett, wrote ‘If you had gathered the stock of a thousand butcher-shops, cut it into small pieces and strewn it about, it would give you a faint conception of the shambles those trenches were.’ By 8am on 20 July 1916, the battle was over. Casualties had mounted to 5,533 Australians (including 470 prisoners) and 1,547 Englishmen. Elliott would bluntly describe the action as a ‘tactical abortion’. The 1st, 2nd and 4th Australian Divisions, which made up I ANZAC Corps, began arriving at the Somme. Their objective was the tiny village of Pozières. The men of the 1st Division were the first into the line and went forward after a ferocious preliminary bombardment. They made little headway attacking Pozières’ eastern sector but captured a tall concrete observation post called Gibraltar to the west. Enemy positions fell after close combat, usually following grenade attacks. The enemy counter-attacked in the morning and a fearsome artillery barrage churned the earth and buried men alive. Scores of stretcher-bearers died attempting to rescue the wounded lying in no-man’s land. The carnage continued for four days as Australian troops struggled to consolidate the ground they had won. When the 1st Division was relieved four days later, on 27 July, it had suffered 5,285 casualties. The 2nd Division were now tasked with capturing the heights overlooking the village. A hasty night attack was launched and any ground gained was lost within two days for the cost of 3,500 casualties. Bean’s diary entry for 29 July described it as ‘…the first wholesale failure that Anzac troops have made.’ The diary entry of Corporal Ivor Williams, 21st Battalion, for 30 July 1916 vividly described what he saw:

There is not one spot where one can find one square foot of earth not dug up by shells… not the slightest trace of a house or woods left. In most places even the bricks and tree stumps are missing, having been pounded to dust. The ground is just honeycombed with shell holes and the whole aspect and contour of the ground is changed… [the battlefield] is just covered with corpses, some terribly mangled and all in an advanced state of decomposition… There are pieces of bodies, armless, legless, and headless… A second night assault was launched on 4 August. This time 2nd Division troops captured all objectives— including the infamous Windmill whose concrete foundations the Germans had transformed into a formidable fortress. The 2nd Division’s casualty toll from both attacks was 6,846. No Australian division, before or since, has suffered more losses in a single frontline tour. The men of the 4th Division relieved the 2nd Division on 6 August 1916. After withstanding a ferocious German counterattack the men turned north. A week passed as the 4th Division inched towards their new objective, Mouquet Farm, under the worst artillery bombardment ever endured by Australian soldiers. The battlefield became a featureless wasteland as landmarks were obliterated. Positions changed hands many times and soldiers struggled to determine where the frontline lay. Losses for the 4th Division climbed to 4,649 before it was withdrawn on 16 August. By mid-August 1916 all three formations making up I ANZAC Corps—the 1st, 2nd and 4th Divisions—had fought at Pozières. The troops expected to be spared further action. They were sorely disappointed. Each division was rested, reinforced to two-thirds strength, and thrown back into the fray. The 1st Division commenced its second tour on 16 August. After one week and 2,600 casualties, they were relieved by the 2nd Division who in five days of fighting, from 22 August, managed to capture the farm only to lose it again for losses of 1,300. The 4th Division returned to the battlefront on 27 August and suffered 2,400 casualties before being brought out of the line on 5 September. The Australians welcomed the transferal of the Pozières battlefield to the Canadian Corps. Shattered weapons and equipment lay across a desolate wasteland of shell craters and ruined buildings. Rotting corpses and body parts littered the field. The acrid smell of explosives blended with the sickly sweet odour of death. Pozières was said to be a victory but it was certainly not a resounding one. In six weeks, in 19 separate actions, I ANZAC Corps had suffered 23,000 casualties, including 6,750 dead—casualties comparable to the entire eight-month Gallipoli campaign. Deafening, bowel-churning artillery barrages at Pozières, coupled with the horrific sight of dismembered bodies, and the constant threat of being buried alive, or torn to pieces by shrapnel, led to the first significant spate of shell-shock cases among troops of the AIF. Bean would famously state that Pozières was '…more densely sown with Australian sacrifice than any other place on earth.' The scale of the losses at Fromelles and Pozières became apparent at the very time the Australian government sought to counteract a slump in enlistments by introducing conscription for overseas service. Australian families, struggling to cope with the news of their loved ones’ death or injury, began to question the value of this terrible war. The conscription referendum of 28 October 1916 was defeated after a bitterly divisive campaign. The enemy too was scarred by their experience on the Somme. In an effort to shorten its frontier and make its position in the west easier to defend, Germany would withdraw its forces to a newly developed and immense system of defences, the Hindenburg Line, in March 1917. Tackling this mighty obstacle would cost the lives of thousands more Australians. The shockwaves of 1916—social, political, economic, strategic, and personal— would reverberate far into the future. Neil Sharkey has been the Exhibitions Curator at the Shrine of Remembrance since 2007. In that time he has developed the Shrine’s Second World War Gallery and dozens of temporary exhibitions, including Pozières: Australians on the Somme which was on display at the Shrine from March to August 2016.