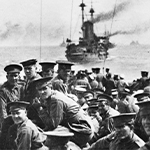 The Gallipoli campaign, commemorated each year on Anzac Day, reverberates with importance as a symbol of what it truly means to be Australian. However, the facts of the battle—which was minor against the scale of the First World War and cost less than a sixth of the Australian deaths on the Western Front—are often forgotten or obscured.

Peter FitzSimons, with his trademark vibrancy and expert melding of writing and research, recreates the disaster as experienced by those who endured it or perished in the attempt.