HMAS Sydney: The most famous ship in the fleet

by Dr Adrian Threlfall. The four ships which have, thus far, carried the name HMAS Sydney have seen action in half a dozen wars spanning more than 100 years. As construction has just begun on the latest HMAS Sydney it is an appropriate time to look back at the ships and actions which helped create that legend. 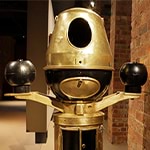 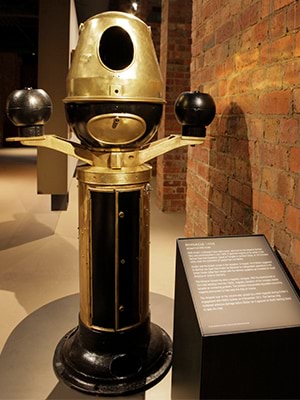 On 11 November many Australians take a moment to pause and reflect on the anniversary of the armistice in 1918. While not as momentous as the end of the First World War, for the Royal Australian Navy (RAN) and one ship in particular, November is also a very special month.

The original HMAS Sydney was a Town Class Light Cruiser, built in Govan, Glasgow in 1912. She arrived to a rapturous reception at Sydney Harbour when she joined the newly created Australian Fleet on 4 October 1913. Less than a year later she would find herself tasked with seizing German possessions in New Britain and New Guinea following the outbreak of war on 4 August 1914. On 1 November she, along with her sister ship Melbourne, sailed from Albany as escorts for the first ANZAC convoy. The 38 troopships carrying Australian and New Zealand personnel sailed north-west across the Indian Ocean, bound for the Middle East. Early on the morning of 9 November a distress signal was received from the wireless station on the Cocos Islands less than 50 miles to the east and Sydney was dispatched to investigate.

It was quickly discovered that the German commerce raider SMS Emden had launched a landing party to seize the wireless station. It was a race against time as Sydney was faster and more powerful than the German ship. Captain Karl von Muller in command of Emden knew his only chance was to run so he immediately weighed anchor as his gun crews prepared for action. Almost as soon as they sighted the Sydney von Muller opened fire. Salvos of gunfire fell nearby and soon Sydney returned fire. On her third salvo hits were registered. Now that they had the Emden’s range, Sydney bracketed her and she staggered under the fire. Within minutes she was wrecked and von Muller ran his ship aground on North Keeling Island reef to save the remainder of his crew. Eventually the German ensign was taken down and a white flag of surrender replaced it. After the devastating Royal Navy losses at the Battle of Coronel only eight days earlier off the coast of Chile, this Australian naval victory was received with jubilation. For the rest of the war Sydney operated in the Atlantic Ocean and North Sea. The first HMAS Sydney then spent the remainder of her career as Flagship of the Australian Squadron until she was decommissioned in 1928. Only six years later Sydney (II) would be launched in September 1934, having been built at Wallsend-on-Tyne, England. She and her sister ships Perth and Hobart were Modified Leander Class Light Cruisers and all would see service during the Second World War. Sydney’s station on the outbreak of war was Fremantle and she spent most of the next eight months on patrolling and convoy escort duties in the Indian Ocean. In May 1940 she sailed for the Mediterranean to join the Royal Navy. Here she would be engaged in multiple battles as the Axis forces, with air superiority, ensured every sailing was fraught with danger. On 18 July her finest hour in the Mediterranean arrived as she left Alexandria to support Royal Navy destroyers in the Aegean Sea. At dawn the next day the destroyers were attacked by two powerful Italian cruisers. Fleeing southwards the British destroyers were in dire straits as they neared Cape Spada off the north-western coast of Crete, before Sydney opened fire at ten miles range. Stunned, the Italians were soon hit by well-aimed salvos and attempted to escape behind a smokescreen. The Giovanni Delle Bande Nere managed to get away but the second cruiser Bartolomeo Colleoni was clearly in trouble, having been repeatedly hit. The Royal Navy destroyers were ordered in to finish her off with torpedoes and pick up any survivors. What became known as the Battle of Cape Spada was Sydney’s finest hour and she returned to Alexandria Harbour to a rousing reception from the rest of the Mediterranean fleet. At home the news of her victory was equally well-received.

But the celebrations were short-lived and soon she returned to her normal duties of patrolling, convoy escorts and shore bombardments, both in the Mediterranean and the Atlantic. In January 1941 things would change as she was ordered home to Australia. On 9 February she berthed at Circular Quay, Sydney and was met by many thousands of well-wishers. Now that she was posted to Australia Station, Fremantle, her duties saw her on patrols and convoy escort work in the Indian, Southern and Pacific Oceans.

On Armistice Day 1941 Sydney departed Fremantle to escort the troopship Zealandia to Sunda Strait, Dutch East Indies where she would hand over her duties to the cruiser HMS Durban. Sydney was then expected back at Fremantle on 20 November. It was not to be. As is now known, the German commerce raider Kormoran, disguised as the Dutch merchant ship Straat Malakka, had been operating for several months in the Indian Ocean. At approximately 16:00 hours on 19 November 1941 Sydney noticed a single vessel steaming 130 miles off Shark Bay, WA. Over the next hour Sydney signalled with searchlight and flags, slowly drawing closer. At 17:30 the two vessels were only a mile apart, dangerously close and the Kormoran could no longer keep up the subterfuge. She opened fire with her full armament, devastating Sydney’s bridge and fire control. The battle raged for half an hour with Sydney burning furiously and the Kormoran sustaining critical damage. The two ships drifted apart and those on Kormoran last saw Sydney at 18:25 disappearing to the south-south-east. Over the next few days more than 300 survivors of the Kormoran were rescued from lifeboats but none from Sydney. Eight days later a badly damaged Carley float was recovered but no survivors. The loss of Sydney and her complement of 645 crew was a devastating blow to Australia. Theories discussing exactly what had happened to her, and how she was lost, circulated for years. Most of these finally ended when, on 16 March 2009, she was located, 2,500 metres below sea level, near where she had fought her final battle. 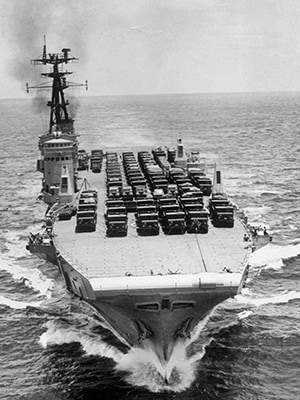 Only seven years later another ship would bear the name Sydney. A Majestic Class light aircraft carrier, she was originally laid down at Devonport, England in 1943 as HMS Terrible but had not been completed when the war ended. Three years later HMAS Sydney (III) became the first aircraft carrier to serve in the Royal Australian Navy. In April 1949 she arrived in Australian waters and took on her complement of Hawker Sea Fury and Fairey Firefly aircraft. In October 1951 she was deployed to Korean waters where her aircraft flew hundreds of missions in support of United Nations operations. On 9 November 1951 she suffered her first combat casualty when one of her Sea Furies was shot down. Early in 1952 she departed the combat zone but late in 1953 she would return to Korea for another tour of duty. Following modifications in 1962 she next saw service as a Fast Troop Transport. Once the Australian commitment to the Vietnam War increased in 1965 she had a new role—as the Vung Tau Ferry.

Between May 1965 and November 1972 she would visit South Vietnam 25 times, ferrying troops, weapons and equipment to and from the combat zone. She would become a familiar sight to many thousands of Australians involved in that war. On 1 November 1972 Sydney would make her final voyage to Vietnam with supplies for the South Vietnamese, arriving at Vung Tau on 23 November. There she collected the final Australian equipment and turned for home for the last time. In November 1973, after nearly 30 years’ service, the third HMAS Sydney was paid off and eventually sold for scrap. HMAS Sydney (IV) an Adelaide-class guided missile frigate, constructed in the Todd Pacific Shipyards, Seattle, Washington State, USA, was not as well-known as her forebears, but she too gave many years meritorious service and received her own battle honours. Commissioned in 1983, she would serve with the Royal Australian Navy (RAN) for longer than any of her predecessors. In December 1990 she would enter the Persian Gulf and serve for several months with Coalition forces providing air defence to the Allied naval forces in the brief Operation Desert Storm. Later she would support INTERFET in East Timor and return to the Persian Gulf several times throughout the 2000s. November would be a momentous month for her, as it was for all her namesakes, as she was decommissioned on 7 November 2015. Only days later on 19 November 2015 the keel of the fifth HMAS Sydney was laid down at the shipyard in Osborne, South Australia. In 2020 she is scheduled to be commissioned, as one of three Hobart-class air warfare destroyers. And so the most famous name in RAN history will continue for the foreseeable future.

Dr Adrian Threlfall is a regular contributor to Remembrance. Adrian has seen service in the Australian Army Reserve and lectured in military historian at Victoria University. He is an educator at the Shrine of Remembrance, where he provides learning experiences to students on Australian service in times of war and peacekeeping operations. Adrian’s first book entitled Jungle Warriors: From Tobruk to Kokoda and Beyond is for sale in the Shrine bookshop. His second book, Reg Saunders: An Indigenous War Hero, is also available.