by Dr Ian Jackson A routine patrol turned into a desperate battle against an overwhelming force. Fifty years on, the men who took part are still fighting for recognition. Operation Smithfield began not with a whimper but a bang.

At 4:08pm on the afternoon of 18 August 1966, a platoon of Australian soldiers in a rubber plantation near the Vietnamese village of Long Tan came under sustained machine-gun fire. Almost at the same time, the monsoon broke and heavy rain started falling. At first they thought they were fighting a platoon sized group – 20 to 30 men – and then a company – up to ten times that number – but they soon realised that they were under attack by at least a battalion of well-armed Viet Cong soldiers. Second Lieutenant David Sabben in the rubber plantation on the morning after the battle of Long Tan. An abandoned Viet Cong machine gun can be seen in the background.
AWM (FOR/66/0658/VN)

The men under attack were 11 Platoon of D Company, 6th Battalion, The Royal Australian Regiment (6RAR), commanded by Second Lieutenant Gordon Sharp. D Company had set out that morning to search for a Viet Cong unit that had mortared the Task Force base at Nui Dat in the early hours of the previous day. Major Harry Smith, commander of D Company had trained them hard, and their theme song for the long hours of marching was Nancy Sinatra’s hit of that year, ‘These Boots Were Made for Walking’. But as they moved away from Nui Dat it was Col Joye and Little Pattie they could hear: the entertainers were giving a concert for the men still on base.

Two other companies of 6RAR had spent a day searching: they found the mortar position and traces of Viet Cong movements, but the enemy remained elusive, and D Company had little expectation of finding them in any great numbers. This wasn’t contradicted by 11 Platoon’s first direct contact with the enemy, which had occurred less than an hour before: six to eight enemy soldiers had literally walked into the patrolling platoon.

The signs were that something more dangerous was out there in the rubber plantation. Signals intelligence showed a Viet Cong main force radio transmitter moving closer and closer to the base that the 1st Australian Task Force had established at Nui Dat a few months before. The enemy soldiers encountered by 11 Platoon had AK-47 rifles and were wearing khaki uniforms, not the black clothes the local Viet Cong unit wore: indicators that a main force unit of the enemy was closing in on the Task Force base.

Gordon Sharp was killed early in the attack on 11 Platoon. Sergeant Bob Buick took over. The platoon was cut off from their company headquarters and from the other forward platoon, Second Lieutenant Gordon Kendall’s 10 Platoon. With dwindling numbers able to fight, and running short on ammunition, Buick knew their only hope was to bring in artillery fire right in front of their position, despite the risk of being hit. New Zealand’s 161 Field Battery and the Australian 103 and 105 Field Batteries fired almost continuously for the rest of the battle from their gun positions within the Task Force base, a total of some 3,000 rounds, providing a crucial defensive screen in front of the platoon positions.

Meanwhile Smith had called for ammunition resupply by helicopter. RAAF instructions forbade operations into unsecured areas, but the situation was desperate and two 9 Squadron helicopters were sent to drop boxes of ammunition to D Company.10 Platoon moved to assist the isolated 11 Platoon but found themselves surrounded on three sides by Viet Cong. Their radio was destroyed in the hail of fire. Private Bill Akell ran from company headquarters to 10 Platoon, dashing through enemy fire and killing two enemy on his way, to bring 10 Platoon a radio. The platoon pulled back to Company headquarters.

For two hours, 11 Platoon fought off the attack. Major Harry Smith, D Company’s commander, sent 12 Platoon, commanded by Second Lieutenant David Sabben, to try to reach 11 Platoon. But 12 Platoon came under attack from three sides and were forced to stop short of the 11 Platoon position. Buick had decided to made a break for it and, running through the gunfire, he and his men spotted and joined Sabben’s platoon. Together they fought their way back to D Company headquarters.

D Company was now united but still outnumbered and in grave danger. Task Force headquarters had already started preparations for a full scale rescue mission. A Company 6RAR and 3 Armoured Personnel Carrier (APC) Troop, under Lieutenant Adrian Roberts, were told to get ready. B Company, already out on patrol in the area, headed towards the battle.

Meanwhile, D Company were fighting off wave after wave of Viet Cong attacks. As one soldier described it:

A solid line of them – it looked like hundreds – would suddenly rush us. The artillery would burst right in the middle and there would be bodies all over the place. The survivors would dive for cover... wait for the next attacking line, get up and leap over the dead to resume the rush.

The driving rain was pierced by the glow of tracer fire. Signalling with whistles and bugles, lines of enemy soldiers advanced on the Australian positions, backed up by machine gun fire. The artillery fire was a vital defensive screen, but attacks were coming from multiple directions, and darkness was approaching.

D Company had no option but to hold out for the relief force, but it was agonisingly delayed by communication problems and obstacles on the route, including a creek swollen by the heavy rainfall. Finally, the Armoured Personnel Carriers reached the rubber plantation, where they intercepted a force of enemy soldiers crossing their path. An intense fight ensued. Members of 6th Battalion, the Royal Australian Regiment (6RAR), on the Armoured Personnel Carriers of 1 APC Squadron, wait to return to base after the battle of Long Tan.
AWM (CUN/66/0695/VN)

The APCs charged forwards into the waves of enemy soldiers. At the same time B Company arrived on the scene. Abruptly, the shooting stopped, and the enemy retreated.

The battle and its aftermath – given the name Operation Smithfield during the night – took a heavy toll on D Company. A total of seventeen Australians – eleven of them National Servicemen – had been killed and 24 wounded. But 245 bodies of enemy soldiers were found, as well as three wounded soldiers and marks suggesting many more wounded or killed soldiers had been dragged away. The Task Force’s evaluation, based on captured documents, suggested that the total enemy force had been around 2,500 men, including regular soldiers of the North Vietnamese Army. 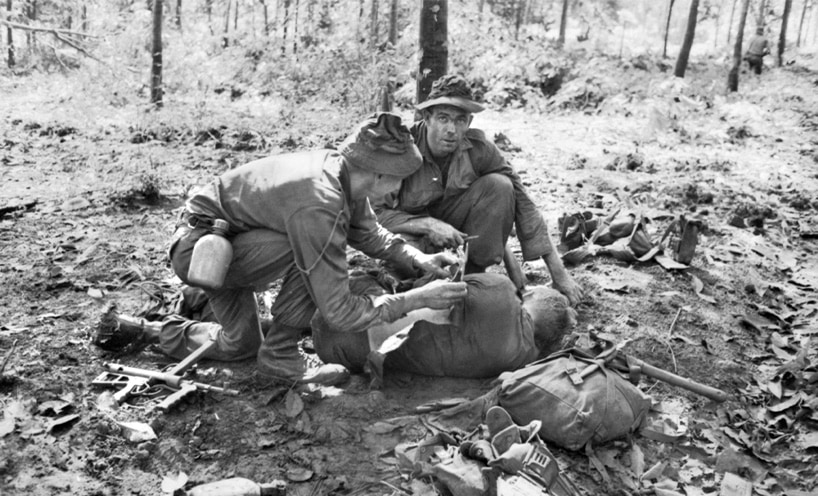 Lance Corporal Georgie Richardson and Sergeant Bob Buick apply first aid to Private Jim Richmond of 11 Platoon. Richmond had just spent all night wounded on the battlefield, having been shot twice in the chest.
AWM (FOR/66/0664/VN)

While great publicity was given to the victory at Long Tan at the time, the formal recognition of the actions of the men who fought that day, through the Australian military honours system, was badly mishandled. D Company 6RAR were awarded the US Presidential Unit Citation, only the second Australian unit to receive this distinction.

But Australia’s administration of the Imperial honours system at the time had fixed quotas limiting the number of medals. As Ian McNeill, the Official Historian, noted, ‘The system of allocation of medals by quota resulted in the number and degree of awards being little short of insulting in view of the heroism displayed.’ Instead of medals, the government of South Vietnam was only allowed to give dolls and cigarette cases to the men of D Company they wanted to recognise for their courage at Long Tan. Bill Akell is at the centre of the front row.
AWM (CUN/66/0750/VN)

Worse still, Australians were not permitted to accept foreign awards without Australian government approval. Twenty members of D Company were recommended for South Vietnamese gallantry awards and D Company was to receive a Vietnamese unit citation. A ceremony was organised, but when approval was not forthcoming, the embarrassed Vietnamese had to give the soldiers dolls and cigarette cases instead.

Major Harry Smith, commander of D Company, who made recommendations for awards immediately after the battle that were not approved, has fought hard for more recognition for his men in the years after the battle.

Bill Akell, who ran to 10 Platoon to bring them a vital radio, was recommended for the Republic of Vietnam’s Gallantry Cross with Silver Star. He now lives in Buninyong, near Ballarat, where he is a long-serving member and former president of the Buninyong RSL. He has been campaigning for more than 40 years to rectify the inequity of the quota system, pointing out the absurdity of the commanding officer of the Task Force being told in advance how many medals could be awarded in a 12 month period: ‘How can you put a quota on bravery’?

Akell joined the Army in 1964 at the age of 17, and was sent to Vietnam at the minimum age for overseas service, 19. He recalls that ‘all young soldiers at that stage were keen to go... it was a bit of an adventure’. Long Tan was when it suddenly became clear how dangerous the war was. The battle has remained with him in the years since: ‘It was an experience that stays with you for the rest of your life... there is always something that reminds you of it’.

Over the years there have been multiple reviews of the honours awarded at the battle of Long Tan. At the time of writing the Defence Honours and Awards Appeals Tribunal is conducting a further review. Bill Akell feels that fifty years on, this represents the last chance to give the men who fought the recognition they deserve.

Dr Ian Jackson was Assistant Curator in the Exhibitions and Collections section of the Shrine. He curated the special exhibition, 1966: The Year that Changed the World.