One Day in Afghanistan

by Chris May In September 2011 Corporal Christopher May was wounded by an Improvised Explosive Device (IED) while serving with 3rd/4th Cavalry Regiment in Afghanistan. This is his story. On 23 September 2011, I was commanding a Bushmaster Protected Mobility Vehicle (PMV) near Siah Sang, a remote Afghan village some 50km north of Multi National Base Tarin Kowt (MNB-TK). Our task was to move to another remote village with the Female Engagement Team, to assist a sick local child. This was a ‘hearts and minds’ mission, while the remainder of Combat Team Delta (D Company, 2nd Battalion, The royal Australian regiment) provided security with US Army elements for building an Afghan National Police checkpoint.

Orders were conducted early morning, and step off occurred around 8.30am. Movement was slow, due to numerous intelligence reports of insurgents laying IEDs nearby. IED activity restricted coalition movements within the Area of Operations and was one of the main threats in Afghanistan.

Less than an hour in, the Engineers reported that they had found an IED. A pressure plate had been buried in the loose shale of an old creek bed. The Explosive Ordnance Disposal (EOD) team ‘Wallaby’ was called forward to investigate further. The Chief Petty Officer of the EOD team decided to ‘Blow in Place’ to maintain the movement of the convoy. Once the IED was destroyed, the Engineers mounted back up and kept moving forward. 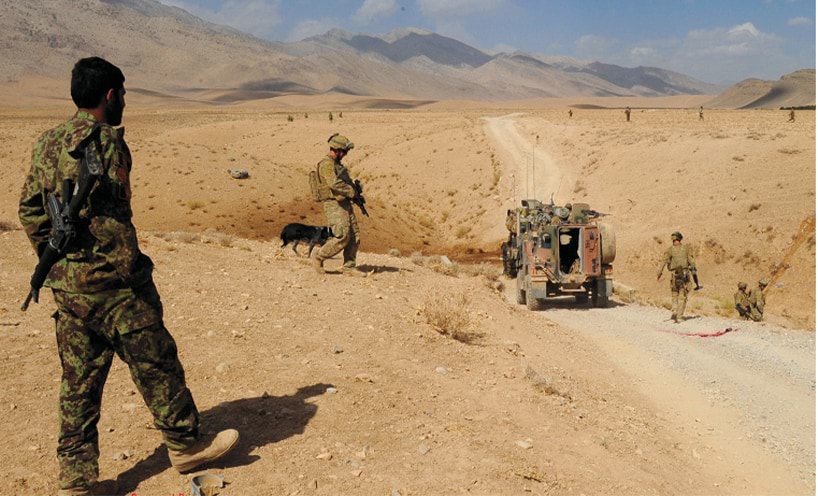 It was about noon when I approached a large culvert that had a coalition-built bridge across it. There was no way to bypass it, as the riverbed had steep sides that some vehicles would have struggled with.

I radioed through to my Troop Leader, Lieutenant Ken ‘Boss’ Semmens, to inform him of the threat. I told him that avoiding the route would involve cross-country movement, which was not preferable to the Afghan National Army vehicles at the rear of the convoy. The decision was made to cross the bridge. The Engineer search team dismounted, pulled out their MINELAB metal detectors, and moved forward of my vehicle to search for any deadly IEDs.

The bridge was made of concrete, with reinforcement steel throughout. This would pose a problem for the MINELABs, so the Engineer Section Commander brought out the Explosive Detection Dog to assist. The search over 50m of ground took just under an hour in the heat of the middle of the day.

The engineers took their time on this culvert. There was not a good feeling about it: it just seemed too ‘textbook.’ Once across to the other side, the engineer search team dropped to one knee and gave me a thumbs up, indicating that the route had been searched and that I could bring the Bushmaster forward.

I radioed through that the search was complete and the movement would begin. The vehicles all started up and I said to my driver, Trooper Rhys ‘Ned’ Kelly, ‘righto mate, let’s go.’ The Bushmaster rolled down into the culvert and across the bridge.

The vehicle disappeared into a cloud of dust and smoke. I remember seeing the midday sun disappear right before I hit my head; I was knocked unconscious and thrown violently into the back of the vehicle.

The next thing I remember was coming to in the rear of the vehicle, face down on top of my arms and the voice of Ned yelling ‘Maysie, are you alright?’ I responded with ‘I can’t feel my legs’, and blacked out once more. 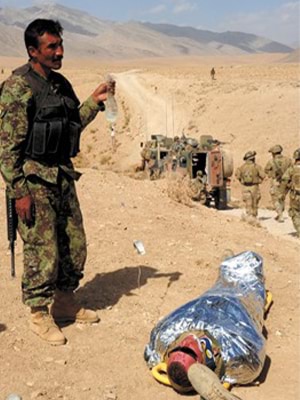 When I awoke I remember the scent of ‘Port royal’ rollie cigarettes mixed with sweat. It was the Chief Petty Officer from the EOD team as he was placing a C-Spine collar on me. I asked him, ‘what happened?’ and his response was chilling; ‘you’ve hit an IED mate, you’ll be right.’ I blacked out once more.

I came to with the jolt of the spine board being picked up by the EOD Techs and an Engineer. I was carried up behind armoured cover from my mate Trooper Jeff Casson’s PMV. The threat of a complex attack still existed and the Infantry section was dismounted to assist the shocked Engineers with the security of the site.

I came to once more by the side of the PMV, the midday sun burning my eyes. I asked Jeff, ‘Can I have some sunglasses?’ through the garbled language of, ‘my eyes, the sun, glasses.’ It made sense to me at the time.

As I lay there on the spine board, wrapped in an emergency blanket and unable to feel my legs, I was given morphine for the pain. This seemed to boost my attitude and demeanour and I began laughing saying, ‘they didn’t get me Jeff, haha, they didn’t f***kin’ kill me.’

This was not helpful to Jeff as he was liaising via radio with the US Army 101st Airborne AME Blackhawk helicopter, callsign ‘Dustoff.’ He promptly told me to ‘shut up mate.’ The CASEVAC (casualty evacuation request) had been relayed to the role 3 Medical Facility at Tarin Kowt and they were on standby.

The helicopter arrived and settled in the Afghan desert dust. I was loaded up and right before the door shut, Jeff leaned in, patted me on the chest and said, ‘You’ll be right mate, I’ll see you in TK in a while.’

It wasn’t until then that the reality of what had just occurred really hit home. I had just survived an IED blast, similar to the ones that had killed Australian troops previously. I was lucky to be alive. The flight was rough and the smell of the aircraft was stale, but through the open hatches, cold Afghan air slipped through and gave some hope that it would end. I remember tearing up on the flight, still trying to wriggle my toes, my brain not registering their existence and thinking, ‘I live on the second storey of a townhouse in Townsville, how am I going to get up to my house...am I going to end up in a wheelchair?’ It was a pretty terrifying thought.

The aircraft touched down and the door slid open. Medics from different nations were there: Australian, Singaporean and American. I was taken out, slid into a vehicle and driven up to the triage bay of the role 3. I was taken in, my uniform was cut off and the medical staff frantically rushed around. I remember asking the medic who was doing obs ‘Jacqui... do I have an erection?’, remembering back from force prep that spinal injuries sustain an erection if they do get paralysed.

I was rolled onto my side and the doctor felt my back, feeling for a fracture or break. I remember feeling a sting in my back and then a feeling of relief. The worst pins and needles I had ever had in my life had just begun. My legs were OK; my body had just received an excessive blow to my lower back and had gone into protection mode. Shock had set in as I lay on the spine board at the incident site.

I was given stitches for a laceration I received to my face after headbutting the butt of my Mag 58 machine gun, and I was carried out into the ward to recover. I had developed a stutter due to the knock I had taken to the head. I was moved into the ward in the bed next to Ned and told: ‘rest up, the Doctor will be round soon to check on you.’

Meanwhile, back home in Australia, my mother, Silvi, and my father, Robert, were on the Spirit of Tasmania, returning home from a holiday with friends. It was around 10.30pm as the ship came into phone reception. There were numerous missed calls from a private number, and my eldest brother, Damien, had tried to call a few times.

Dad promptly called him back to find out what was going on. He replied, ‘Chris has been hurt, he’s in hospital in Afghanistan.’ Dad told Mum and she collapsed on the floor in hysterics. Her youngest of four boys was on the other side of the world in hospital. Information was not yet at hand: she just wanted to get off the ship.

Back in Afghanistan, a bit of time had passed, and I asked to make a phone call to one of my brothers, Scott. Scott had recently discharged from the Army, and he had served in Iraq and Afghanistan. He knew the threat and I knew I would be able to tell him what had happened in a way he would understand.

He answered the phone. ‘Yeh, it’s me. I’m in hospital’, I stuttered.

‘What happened?’ he replied.

‘I had an accident, I hit a big one, ‘bout two jerries big, car’s a write off’, struggling as I went.

‘You OK?’ he said, with a bit of concern in his voice.

‘I’ll live. Got a killer headache and a stutter as you can hear.’‘

Right, does mum know?’ noting that mum would be worried. ‘I can’t get through to her or dad, can you give them a call and tell them I’m OK?’, I said.‘Yeh righto, look after yourself, talk to you soon.’

It wasn’t until the next day that I got through to mum. She had spoken to Scott that night and he assured her that I was going to be OK and not to worry too much.

A week later I was flown out of Tarin Kowt on a RAAF C17 aircraft as an Aero-Medical Evacuation patient to the role 3 medical facility at Kandahar Air Field. I spent four weeks in Kandahar being tested for cognitive function and getting scans of my brain to ensure I was able to make the long flight home to Australia.

I left Afghanistan in late October 2011 and have not returned since—though I would have liked to, just to complete one more job and finish on a successful task.

Though the Afghanistan War was over for me, a long journey had just commenced: medical treatment scans, psychologists, psychiatrists, a family intervention, a broken relationship, Post-Traumatic Stress Disorder, depression, anxiety and discharge from the ADF were to come.

This is my story; there are stories that are just as unique from veterans that I have served with. There are also stories worse than mine that cannot be told just yet as the painful memories of the past make life that little bit harder. There is support available to those who need assistance in telling their story. Call Lifeline on 13 11 14 or VVCS on 1800 011 046 for crisis support. All images courtesy of Chris May.

Christopher May is from Berwick, in Melbourne’s south-east. He and his brother Scott set up Young Veterans, an RSL-supported group aimed at bringing veterans together through the conduct of outdoor recreational activities. Chris and Scott were Victorian finalists in the 2017 Australian of the Year awards and continue to work with the RSL assisting veterans of our Defence Force. Chris continues to work with agencies such as the Department of Veterans’ Affairs, the Veterans and Veterans Families Counselling Service and Joint Health Command on mental health awareness in our veterans.