by Jean McAuslan Narrowing the gap between the frontline and home. 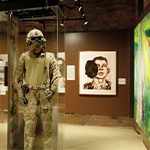 The newly upgraded Recent Conflicts gallery at the Shrine offers a human view of Australia’s modern military engagements and the costs of these wars. Input from Victoria’s recent veterans and currently serving members of the Australian Defence Force has resulted in the inclusion of deeply personal stories of service and sacrifice. The mundanities of modern warfare, the acts of courage, the after effects of injuries, and the anguish felt by Post-Traumatic Stress Disorder sufferers and the families of those who have served are brought into focus.

Veterans observe the role the Shrine can play in narrowing the gap between service people on the frontline and those at home. Most Australians do not experience danger on the frontline or risk their lives in service; most have no idea of what this can mean, unlike communities who suffered in global conflicts.

Around 50 percent of the Shrine’s one-million visitors annually are Victorians, from all walks of life and cultural backgrounds. The gallery offers the opportunity to become informed about our engagement in wars; the costs to those who serve, and the costs to the community of insufficient care or recognition for those who have served. Potentially an informed and aware community can make better choices in future at a personal, family and civic level, in the full knowledge of the sacrifices made in war by individuals, their families and the community. All stakeholders have the capacity to influence policies that address veterans’ concerns. If engaged with contemporary issues of war and peace and veterans, and those currently serving, the Shrine can contribute to an informed and healthy society.

This project has allowed the Shrine to open a conversation with recent veterans, within which they feel safe to articulate their experiences. This offers a sense of validation of their service, as their stories are shared with a wide audience. The benefits are mutual; veterans can more readily process their experiences, which can aid the transition to civilian life, and the Shrine has access to artefacts and memorabilia with which to tell their stories. The Shrine is already experiencing an increased volume of donation offers of personal material

Developing ongoing relationships with recent veterans and their families enables the Shrine to explore a variety of means to honour their service. An array of new programs are now in development and will bring their stories to light.

Three Iraq and Afghanistan veterans shared their personal experiences with the audience attending the gallery launch in February, including serving members, veterans, their families, members of the public and Government representatives.

Feedback from the audience was that they had seldom heard such honest and emotional recounting of veterans’ experience and that the gallery was a fitting tribute to modern service.

I felt a deep sense of privilege today attending the launch of the redeveloped gallery. The guest speakers were incredible in sharing their experiences on the front line, what it meant to them, and how it has impacted their current lives. Raw truth and emotion. Today has given me a different and renewed perspective of our Defence Force personnel. Thank you

Despite the gritty nature of some of the new material, the inclusion of a major art work depicting Sarbi, the Afghanistan Explosive Device Detector dog, allows accessibility across all age groups.

For students, the gallery aligns strongly with the Civics and Citizenship element of the Victorian schools’ curriculum, and it also has resonance with the VCE Global Politics curriculum, encouraging students to specifically visit this space.

For all visitors to the Shrine, this gallery provides a very real window into the experiences of current service men and women, providing invaluable insights into what it is really like to serve in Australia’s twenty-first century wars.

The Shrine gratefully acknowledges the generous support of the Victorian Government, a private donor and the Victorian community for the redevelopment of the Recent Conflicts gallery.