An article on the sad and difficult task of memorialising Australian soliders who lost their lives in World War 1 and consolidating their distant burial sites. By Associate Professor Fred Cahir, Lucinda Horrocks and Sarah Weuffen. When the First World War ended it was time to face the sad and difficult task of memorialising the dead and consolidating their distant burial sites. The mass of death and bereavement resulting from the Great War prompted attitudinal change and significant work from an unsung group of veterans.

When the Australians returned in 1919, they found the skeletons of their countrymen, scraps of uniform with webbing still attached, lying in semi-circles, the ground about them littered with .303 shells.

The unprecedented industrialised warfare of the First World War created widespread trauma and devastation. An estimated 16 million people were killed. In population terms that is the size of a small country and a fatality list two-thirds the current population of Australia.

Of the nearly half a million Australians who enlisted, 62,000 died. For Australians living through 1914–18 this was heartbreakingly significant. Our population was smaller then. Perhaps as many as every second Australian family mourned a dead husband, son, cousin, uncle or friend by the war’s end.

The wave of death began at the outset of the war. The confronting stories of dead bodies lying on the battlefields are well known: military authorities were overwhelmed by casualty numbers. Soldiers dealt with the scene in many ways, including inventing descriptive, sometimes macabre, names for where the dead could be found:

Troops responded to the scenes of corpses in the front line and the threat of fatalities by providing monikers for the trenches and areas of the battlefields... these names served as indicators of the presence of both death and burial in the front lines.

Bodies weren’t left lying in the open callously—burial duty was constant; soldiers would find and bury dead comrades where they could with care and reverence. And, as the war progressed, improved methods for dealing with burials, identification and graves registration were introduced. But not all bodies could be buried or found.

If a battle had been lost, there was no chance to go into enemy territory and seek out fallen mates, for instance, at Gallipoli, where almost half the Australians who died have no known grave. 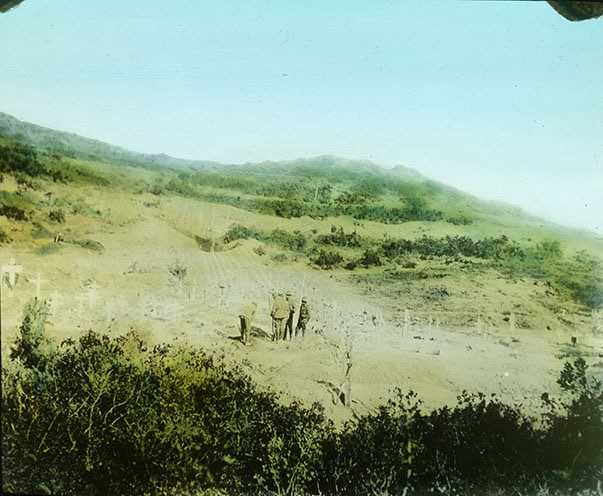 Even in friendly territory it was impossible to locate all the dead for burial. Mechanised weaponry obliterated bodies beyond recognition. The new dual-identity disc system, introduced mid-war, helped identify partial body remains. But many people simply disappeared, to be labelled as missing, assumed dead—a term that would engender a particular feeling of anxiety at home.

Sometimes even the dead who had been identified and carefully buried would be churned into the earth as territory shifted back and forth over the four years of war.

By the end of the war not all bodies were located or marked—even today a third of the Australian dead have never been found. Temporary cemeteries were scattered over a great swathe of Western Europe and the Middle East. This created an immense challenge for authorities on how to appropriately care for and commemorate the war dead.

The issue became a pressing problem as the war progressed. Prior to the First World War, officers might have been memorialised with grave markers, but most front-line soldiers were buried unmarked, often in mass graves. However, social expectations changed in the 20th century. There was now a belief that every dead soldier, if not able to be repatriated home, should be honoured with a gravestone.

Throughout the British Empire, anxiety built amongst the bereaved about how and whether graves of loved ones were being cared for and whether the missing would ever be found. For Australians, so far away from the burial sites, this became a great burden. They looked for reassurance that their beloved would not simply be left to rot in a distant field. As Henry Whiting, graves detachment worker wrote in 1919:

Many mothers picture their sons blown to pieces and no record.

In 1917, as a result of ongoing graves registration campaigning by Sir Fabian Ware and others, the Imperial War Graves Commissions (IWGC) was established to commemorate every soldier with permanent memorials or headstones, and to make no distinction between rank.

For the first time in Australian and British military history, significant efforts would be made to identify each soldier who fought and died for their country and consolidate their scattered graves on foreign soil.

It was a controversial decision that had a lasting impact on the landscape of Australia. Where could grieving families go to place a wreath on the anniversary of their boy’s death? It led to the building of cenotaphs and monuments around the country recording names of the distant dead. Eventually, Melbourne’s Shrine of Remembrance was built in 1934 to provide a central place for families to grieve.

In April 1919, The Sun reported the Australian Graves Detachment had been formed to search the fields of Europe:

The work will take considerable time, but is regarded as sacred duty by all Australians to their fallen comrades.

A few months later, The Mercury reported from the now-silent Gallipoli peninsula revisiting the places of the Anzacs:

Skeletons are still to be seen, showing where the wounded men managed to get into a bush or a little scrub to die. The outline of the body is still there, with knitted socks, puttees, and other fragments sufficient to identify.

The AGD, in particular, was made up of 1,100 men—a mix of volunteer ex-soldiers and new recruits, who had enlisted too late to see action. Private Will McBeath was one such late recruit, still training in England when the Armistice was announced. Veteran volunteers included the Indigenous war veteran ‘Darky’ Smith and Frank Cahir MM DSM, who was at the Gallipoli landing and then the Western Front.

The AGD worked in the fields at Pozières and Villers-Bretonneux, which had seen significant Australian loss of life. Detachment worker William Lee wrote:

I had the interest of the work at heart, I had fought over areas with our troops and knew all its associations and tragedies. Working alongside Canadian and British teams, the AGD searched the battlefields with shovels and stakes to locate burial sites, find unrecorded bodies, and exhume remains. Bodies were wrapped in canvas or hessian, tied with rope and taken by stretcher on horse-drawn carts to be reburied in a Commonwealth graveyard. Workers would consult with families back in Australia to determine gravestone wording. Once finalised, graves were carefully photographed as mementos for families.

The work was ghastly and unpleasant. The AGD often came across corpses that had lain exposed to the elements for months or years. Henry Whiting wrote:

I can assure you it is a very unpleasant undertaking. Mainly all the men we have raised up to date have been killed 12 months and they are far from being decayed properly, so you can guess the constitution one needs. I have felt sick dozens of times.

It was also dangerous work—active hand grenades and mines were a real threat, the ground was filthy, and the process of exhumation, transportation and reburial, physically exhausting. Will McBeath wrote:

This week we have reburied 200 men... You would hardly think there were so many graves in the field… there are hundreds to come in yet.

In some cases, men of the AGD were digging up people they knew. In other cases, they were doing gruesome detective work, digging up decaying unrecognisable bodies in mass graves and looking for any clue to the dead man’s name—an identity disc, pay book, letter or photo. William Lee wrote about why he persevered:

We carry on knowing we are identifying Australian boys who have never been identified.

The grim routine took a lasting emotional toll. Frank Cahir volunteered for Graves Detachment duty in Europe without returning to his family in Victoria. When he finally did return, in 1921, he struggled adjusting to life in Australia, eventually suiciding; leaving behind a young family.

Frank Cahir’s example illustrates how difficult it is to understand what motivated these men, particularly the volunteers, to take on the work. Letters from the time show they drew on a mix of duty, loyalty and faith, sometimes simply needing to postpone the uncertainty of life after war. But the work was clearly tough to cope with.

By mid-1919 there were reported incidents of alcohol abuse, mutinous and risk-taking behaviour and accusations of impropriety. Two official inquiries into the AGD’s irregular performance were held, leading to a change in leadership. The restructured Australian Graves Services (AGS) took over graves duties on the Western Front until 1922. Work undertaken and completed by the AGD, their companion units, the AGS and GRU, and associated Commonwealth workers left a lasting legacy for a 20th century community trying to resolve its sense of loss and grief.

Not all the missing were found. This resulted in the erection of massive monuments at Villers-Bretonneux, Menin Gate and Lone Pine; places where their names would be recorded in perpetuity. But the regular, peaceful monuments and graves in those foreign cemeteries owe a great deal to this unique group of men who took on the harrowing task of looking after our dead. 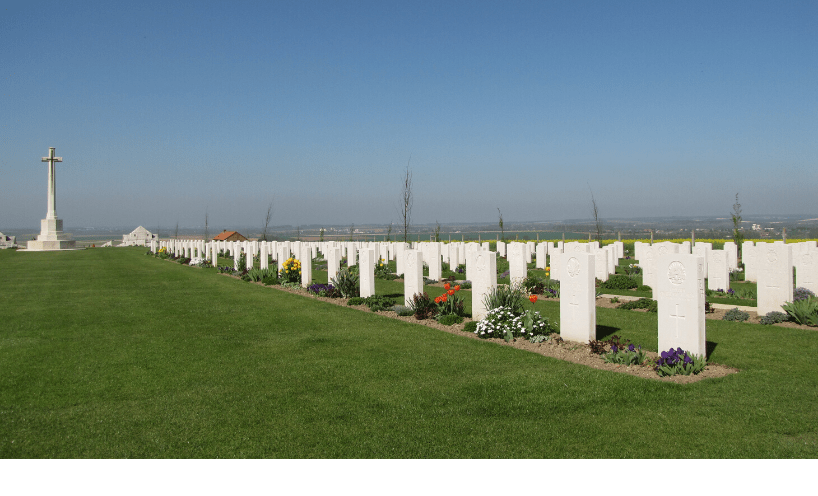 Associate Professor Fred Cahir is a historian at Federation University Australia who has written widely on Aboriginal history. Sara Weuffen is an early career researcher in History Education at Federation University Australia. Lucinda Horrocks is a documentary film producer at Wind & Sky Productions. Sara and Fred have co-edited a new book about the Australian Graves Workers called Devoted labour for the lost, the unknown but not forgotten dead: The Australian War Graves Workers 1918–1922. Lucinda has co-produced a short documentary film on the topic called The Missing.