Shining a Light on the Boer War: The John Charlton Memorial Window

Originally intended as a memorial to one man, the window came to represent soldiers from one Victorian rural district; now it represents all Victorians who lost their lives in that distant South African campaign 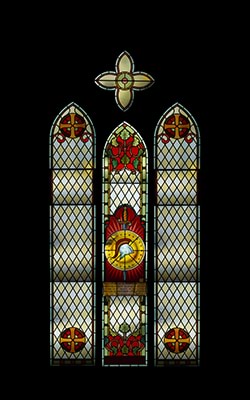 When the Boer War began in 1899, the Australian colonies raised separate contingents of Soldiers of the Queen to fight for the British Empire. By the war’s end in 1902, a new monarch sat on Britain’s throne and the federated Commonwealth of Australia heralded a new era. Today the Boer War, the first to be fought under the ‘Australian’ banner, is almost forgotten, overshadowed by the ‘Great War’ that would engulf and consume the world only twelve years later.

In mid-2017, the Shrine of remembrance will unveil a new exhibit: a stained-glass commemorative window from the Boer War. Although originally intended as a memorial to one man, the window came to represent soldiers from one Victorian rural district; now it represents all Victorians who lost their lives in that distant South African campaign.

The window began its chequered history on 13 January 1903, when it was dedicated as the centrepiece of a new chancel at St Paul’s Anglican Church in Euroa. The Euroa Advertiser described the memorial as ‘a massive three-light frame surmounted by a star’ and ‘far superior to the general run of such work’, possibly alluding to the up-to-date Art Nouveau ornamentation and the elegant restraint of the vibrant central emblem. rising to a height of almost 4.5 metres behind the altar, it undoubtedly impressed the large congregation who had gathered for the grand occasion.

The memorial was dedicated to John Charlton, one of nine children and eldest son of Walter and Mary Charlton, who lost his life in South Africa. Like many local lads, John had been a keen member of the respected Euroa Rifle Club, where men were well-trained as horsemen and marksmen, becoming stalwarts of the Victorian Mounted rifles (VMR). The 2nd VMR Contingent to head for South Africa, commanded by the colourful Colonel Tom Price, included many military-trained Euroa men, among them the Reverend Frederick Wray, vicar of St Paul’s Church as their Chaplain and Lieutenant Leslie C Maygar who in 1902 was awarded the Victoria Cross.

When the 5th VMR Contingent departed from Melbourne on 15 February 1901, Private John Charlton, No. 1467, was one of its number and, from April onwards, the 5th was constantly on the move across vast areas of South Africa, skirmishing with the enemy and engaging in major battles. Despite numerous successes, the 5th became best known for the disastrous Wilmansrust encounter in June, when the Boers surprised and overran their encampment with subsequent heavy casualties.

But almost two-thirds of British fatal casualties were caused by illness and disease. reverend Wray wrote in early 1901:

Our squadrons are losing men. Each day they are sent to hospital with fever... I have only thirty-nine men in my squadron, and the others all have less. The season is very severe and accounts for the enteric fever.

Wray himself suffered and survived two severe bouts and John Charlton was reported as dangerously ill with enteric fever in July. He did not recover and died on 16 August 1901. His marked grave is in the Church Street Cemetery, Pretoria.

News of his death may well have been conveyed to the distraught Charlton family by Wray, who had resumed his clerical duties in Euroa only a month before. Undoubtedly moved by the loss of a comrade as well as member of his congregation, Wray conducted the special memorial service in the black-draped, fully-packed Castle Creek hall. Only a month later he was actively raising funds for the memorial by giving lantern slide lectures on ‘Incidents of the War.’

The window might still be in St Paul’s Euroa if the building had not undergone extensive additions again in 1928–29 when the Melbourne Diocesan architect, Louis R Williams, designed a substantial new chancel and crossing tower. The 1903 window was dismantled, crated and stored under the chancel floor and a smaller memorial window to John Charlton installed in its stead in the west wall of the nave. Over time the existence of the original window faded from local memory.

The crate was rediscovered in the 1980s during building maintenance but without an option to reinstate the window it went from one storage shed to another until it was gifted to the Euroa Historical and Genealogical Society in 2012. However, funding such a mammoth conservation project was an insurmountable difficulty and custody of the window was transferred to archaeologists, Lynne Dore and Maxine Boyd. Under their guidance, the John Charlton Memorial Committee was formed with representatives from the Australian Army and the VMR Association, a specialist stained glass historian and John Charlton’s great-grandniece. This committee has overseen conservation of the window by Almond Glassworks, funded by the Victoria remembers Grant Program.

Surprisingly, given its peripatetic history, few glass pieces were missing. Gradually the glass jigsaw puzzle was reassembled and the full glory of the memorial window re-emerged from its years of accumulated dirt and damage. One major piece, the dedicatory inscription, was not found despite extensive research and enquiry; after considerable discussion, it was decided to replicate the piece, using contemporary photographs and documentation. In November 2016, the conserved window was rededicated and launched, appropriately, at Maygar’s Hill Winery, Longwood East, not too far distant from Walter Charlton’s properties at Castle Creek.

The window is significant as it is one of only twelve Boer War stained glass memorials surviving in Victoria today. Installation in the Shrine of remembrance—at the junction between the Colonial and First World War galleries—will strengthen its importance as a prototype for the hundreds more stained glass windows that followed in the wake of the First World War. The window’s message of loss and remembrance will reach beyond the Charlton family, who lost two other sons in Gallipoli and France, or the many others throughout the Strathbogie district who served and died, and bring new understandings of this all-but-forgotten period of our military past.

The author thanks Lynne Dore and Maxine Boyd for their extensive research, Reverends Patti Matthews and Norman Hart of Euroa, Chairman Lynne Dore and members of the Charlton Memorial Committee and conservators, Bruce Hutton and Phil Davis at Almond Glassworks, all of whom contributed to this article.

Dr Bronwyn Hughes is an art historian with an interest in monuments, particularly stained glass, their relationship to the built and natural environment and significance within Australian culture and society. She is a long-standing member and Immediate Past Chair of the Public Art Committee of the National Trust in Victoria and a founding board member of the Duldig Gallery (2002–14). Her five year study of commemorative stained glass in Victoria, Lights Everlasting, was published online by the Victorian Government Veterans’ Unit in 2015.