The Shrine explores the extraordinary service of First Peoples in Defence

For Kin and Country, the second in a series of three exhibitions exploring Identity at the Shrine of Remembrance, examines the remarkable history of First Peoples’ service in the Australian Defence Force—a willingness to join and fight abroad despite dispossession and the denial of rights at home. In the early 20th century, defence service provided an escape for First Peoples from discrimination and was for many their first experience of equal treatment. Most were paid the same rates as their non-indigenous counterparts and there was little racism on the front line. Indeed, many First Peoples service personnel felt a strong sense of continuing ancient traditions of protecting Country and hoped their example would help improve conditions for their families and communities at home.

Despite this, Indigenous veterans returned to face the same inequalities and discrimination they had known prior to their service, and were additionally refused soldier settlements and denied access to pubs to share a drink with fellow veterans.

To place veterans among their kin, the exhibition is hung according to Country, rather than chronology. It combines photographic portraits that illustrate personal stories of First Peoples’ service from the Boer War to today alongside video interviews, filmed in conjunction with ACMI, which offer insight into the ongoing effects of war service on families and individuals.

"For Kin and Country reminds us all of the incredible legacy of Indigenous service. It reflects the Shrine’s place as the home of commemoration for all Victorians and its role in healing, acknowledgment and remembrance for First Peoples’ service."

The exhibition is supported by a series of podcast interviews with Aboriginal veterans produced by broadcaster Megan Spencer, and Gunditjmara actor Tom Molyneux whose family stories of service are told in the exhibition.

"For Kin and Country is an important and timely exhibition, reflecting on the service of Aboriginal Victorians and the contribution they have made to the armed forces over several generations. For many of them (including my ancestors), appropriate recognition was not afforded them in their lifetimes, so being able to honour their service is an important step for the Shrine of Remembrance to make. The podcasts accompanying this exhibition are a great opportunity for people to hear from living Aboriginal veterans about what service means to them, and how the military has influenced them, their families and communities."

For Kin and Country is open now and the first episode of the podcast can be downloaded here. Two subsequent episodes will be released during NAIDOC Week.

Supporting the exhibition, Tom Molyneux’s captivating show The Mission, which follows the journey of ‘Fighting Gunditjmara’ man, Allan McDonald—one of the first Aboriginal soldiers from Victoria to enlist for war, will be performed at the Shrine on 14 July.

Tom’s great, great uncle Allan fought at Gallipoli and Beersheba, only to be denied a soldiers settlement on his ultimate return to Australia and forced from his land at the Lake Condah Mission. This is the story of his struggle for Country, for love and justice. 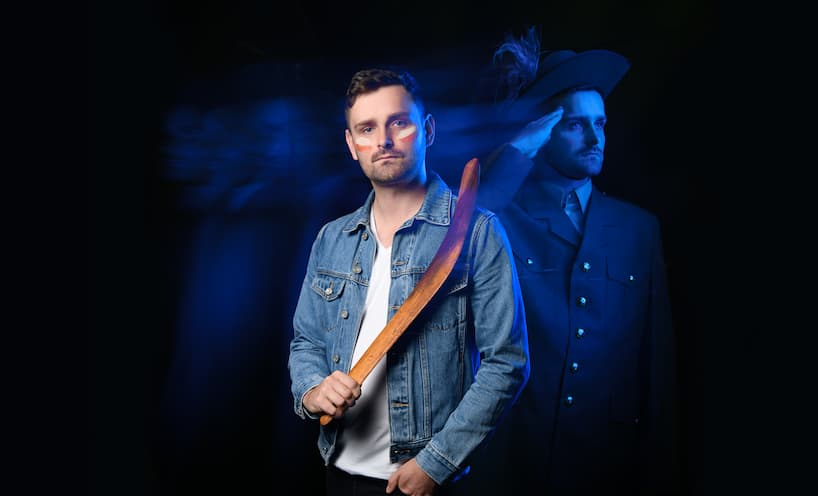 Tom Molyneux in ‘The Mission’

Exhibition: For Kin and Country: First Peoples in the Australian Defence Force

Where: Shrine of Remembrance

Performance: The Mission by Tom Molyneux

Where: Shrine of Remembrance Auditorium