The Women’s Royal Australian Naval Service (WRANS) was formed in April 1941, with an intake of 14 women. During the war over 3,000 women served; as telegraphists, visual signallers, drivers, cooks, writers, dental and optical technicians, ordnance artificers and more. Third Officer Pamela Corben and Signaller Automatic Morse Margaret Hartley were two of those women. 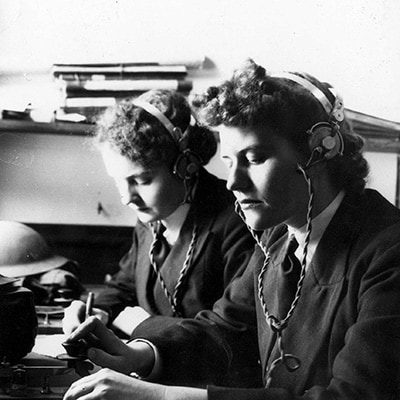 In 1941, the Royal Australian Navy (RAN) reluctantly agreed to follow the Royal Navy’s example and form a women’s auxiliary branch due to the shortage of qualified naval personnel. The initial 14 women were all civilian trained Wireless Telegraph operators and Visual Signallers. They may have had dreams of ship service, but were sent instead to the RAN Wireless/Transmitting (W/T) Station, Canberra (later HMAS Harman) far from the threat of seaborne attack.

The WRANS overcame official doubters and quickly proved their worth; working the same watches as the men, with equal proficiency. Their example led to the navy enlisting women as official naval ratings and the women’s service being regularised. At the height of enlistment women comprised ten percent of all naval personnel and freed up thousands of men for ship service. WRANS served all over Australia, including, by 1945, the operational area of Darwin. They were never allowed to serve at sea.

The WRANS became known as the ‘Silent Service’, in emulation of their British counterparts, because of their ability to keep secrets. No secret was better kept than the role of WRANS in vital code breaking activities. WRANS Third Officer Pamela Nicholls (nee Corben) and Signaller Automatic Morse (SigAM) Margaret Hattersley (nee Hartley) recently shared these stories of their service and their connection to naval intelligence.

It was December 1942, and, sitting for my European History exam at Melbourne University, my thoughts were of Japanese troops trampling through Asia. I walked out of the Great Hall and into the Naval Recruiting Bureau.

With reluctance my mother gave her consent because I was under 21. Knowing me, she knew objections would be met with counter argument. January saw me on a train bound for Harman Naval Depot. I was 19.

On arrival at Harman we were housed in cottage number five, which comprised three bedrooms, a kitchen with a wood fired stove—use forbidden—and a bathroom with a chip bath heater. No fuel was provided, so it was a cold wash. For bathing Lorena, who became my lifelong friend, and I would collect sticks and small branches from the surrounding paddocks and get into the bath together, as the water was cold by the time one had bathed.

Our six week training period was interrupted by two weekend visits to Sydney to have our uniforms made—the first for measurements and the second for a fitting. I think we were the last group to be afforded this luxury. We were then fitted with greatcoats, a hat, pair of shoes, tie, two white shirts, two pairs of lisle stockings, and two pairs of bloomers. Needless to say we supplemented all articles at our expense.

After six weeks training we were considered qualified to go on watch. We were a special group called ‘y’ connected to Bletchley Park, which intercepted Japanese radio messages to and from their ships. The most sensitive of these was the frequency, changed frequently, used by their submarines. I hated the responsibility attached to this duty, sitting for six hours scanning the airwaves; terrified you might miss a signal, thereby putting our ships and men in danger. Fortunately your turn came only about once a week.

On overnight leave, prior to bringing our bikes to Harman, we would hitch a ride to Canberra. We’d stay at the Servicewomen’s hostel to luxuriate in hot showers and restaurant (Greek or Chinese) food, at five shillings. On our way one day a truck pulled up, Lorena hopped in first leaving me to sit on the passenger’s lap. He was a burly tradie with a droopy moustache. Having just received our pay, the grand sum of thirty-five shillings, I was carefully pressing my wallet under my arm. My guy was starting to become fresh when I looked down to see my wallet on my lap. I had been pressing his hand against my bosom! Eighteen months after my arrival at Harman, I was selected to do an Officer’s course at Flinders Naval Depot. It was winter and cold but we had the luxury of hot showers and a heater. Just before my 21st birthday, I received a blue stripe to add to my uniform.

I was then posted to HMAS Magneticin Townsville. General MacArthur had started the push back of the Japanese and all information for Head Quarters at Victoria Barracks in Melbourne was channelled through Magnetic. These signals were all top secret and we cypher officers knew the progress of the war before the ‘Big Brass’ at the Barracks.

I loved dancing, and was good at it. We danced non-stop until midnight. Like Cinderella, I would leave to get three hours sleep before going on watch from four till eight in the morning. If we returned to the Wrannery after 8pm we had to sign in with the time. This was checked weekly by the Captain. My socialising had repercussions in the form of a ‘please explain’ visit to the Captain.

I was sent to Victoria Barracks to do a short course in censorship, as it applied to the Press and Radio. I was then sent to Sydney, working out of Kuttabul at Potts Point. Two weeks there and the Japanese surrendered. I was out of a job.

I left school at 13 and I didn’t have any education to speak of. The only reason I learnt to type and do shorthand was because of Mr Dedman (Director General of Manpower). I came down to Melbourne to my mother, who was working as a housekeeper for a wealthy family and they put me on as a maid. I probably would have lasted at that forever if Mr Dedman hadn’t got into the act and decided that all these big, rich families were only allowed to have one domestic. So for half a day I worked there, washing floors and stuff, the other half I went off to business college and learnt shorthand and typing.

I was disappointed not to get into the Land Army, which had stopped recruiting, so then I thought, as you do when you’re 17, I’d like to join something. I was in a job I didn’t like, and to change jobs back then you had to go through Manpower. you had the choice then of joining up or going to work in a munitions factory, or something like that, so I decided on the Navy. Why did I decide on the Navy? Sounds a bit trite now, I liked the uniform [laughs].

The European War ended and I thought, ‘Oh well, that’s it, they won’t call me up now’, however, they did! They were wanting to replace the four year girls because the Japanese War was still going. A lot of the girls were trying to get out to get married and the boys were all coming back from prison camps and so they replaced them with us.

So—thinking I was going to be a stenographer—they trained us in Morse code. And we only had to listen, we didn’t have to send. We’d just listen to it, and I remember I was very proud of myself. I passed out at 98 percent listening to Morse code—I loved it! It was terrific!

We had to do a fortnight’s training at HMAS Lonsdale, Port Melbourne, and everything you learnt you had to remember for ever more. The King’s Regulations (KR), and Admiralty Instructions (AI), you had to know all these things, and if you broke them you got into trouble.

One time I was in trouble because I didn’t salute an officer. She had an armful of daffodils and I thought ‘Oh she can’t salute me back’, and she stopped and growled ‘you didn’t salute’, and I said ‘how could I?’ I didn’t even call her Madam. Anyway she says, ‘I could have given you an eyes right.’ So that was a salutary lesson—always salute [laughs] it’s up to them what they do with it.

I never did what I was trained to do; except at Monterey, in galvanised iron barracks down at Albert Park Lake. My actual rating was SigAM, which was reading Morse code from these vast tapes. Because they were sent at high speed they came out on tape, so we’d interpret that onto a typewriter. We had little machines, I think they came from the Enigma machine, but it never made any sense. I never understood any of the technology. We used to run the tape through and type up the codes; it was just coding what was in front of you, we never saw the whole message.

[Margaret was drafted to HMAS Harmanafter the Japanese surrender] 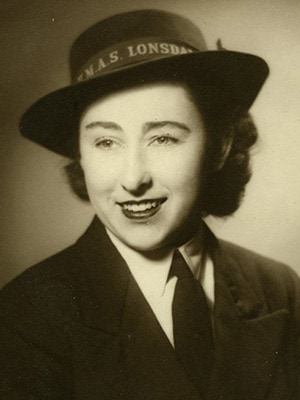 Pamela was saying they had to go and find wood for the bath heater, well when I was at Harman we had a big woodheap in the back, but we had to cut the wood. We had overalls; we wore those on work parties, chipping weeds and doing all those jobs and they were quite comfortable to wear, so if you weren’t at work you could wear them around.

I was made a Day Man (9 to 5 shift) and was put into what was called ‘the hut’, which was a little tiny shed halfway up the hill to the wireless station and we were still listening in to the Japanese and Indonesians. And there was a Petty Officer there in charge, Stan Hall, he taught me arithmetic, he was teaching me things I’d never even heard of, direction finding and all the rest of it. He put me on to listening in to five letter codes; you wrote down all that you heard and that went to a teleprinter operator who sent it down to Monterey for decoding.

Anyway after a couple of days of this listening in nobody could read my printing [laughs]. So he took me off that and put me onto direction finding, which was really interesting—that was great!

I really enjoyed Harman, we used to have a lot of fun there. It was very laid back and really nice...and then of course they sent us all home.

The WRANS who worked at Monterey or in ‘Y’ section were sworn to secrecy and their stories remained untold for decades. In 2009, the British government awarded the Bletchley Park Medallion to the surviving personnel who served in connection with the British codebreaking establishment—Pamela and Margaret were two of the recipients.