The Strength of a Family: The Lovetts of Lake Condah 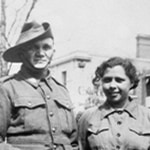 Visitors to the Shrine of remembrance who find themselves in the Ambulatory are struck by the beautiful hand-lettered Books of remembrance. A reflective visitor might pause and note that most of those pages contain lists of men with the same surnames, and wonder about the stories behind them: how many of those men are members of the same family?

All those books with their lists of names contain the seeds of astonishing family stories, but some of these are unique in their power to evoke strong currents and important themes in Australian history. The story of the Lovett family, Gunditjmara people from the Lake Condah area in Victoria’s south-west, is one of a family bonded through the generations by shared dedication to the ideals of service, by courage, commitment and resilience in wartime, and by fighting back against the inequities and prejudice experienced by Aboriginal people in the time since European settlement.

The Lovetts’ service tradition begins with five brothers—Alfred, Leonard, Edward, Frederick and Herbert—who served overseas in the First World War. Their first battle was in circumventing the racial restrictions of the Defence Act, which excluded men of ‘substantially non-European descent’ from joining the Australian Imperial Force (AIF). Having successfully enlisted, Frederick served with the 4th Light Horse in Palestine, and the other brothers all fought on the Western Front. Alfred fought on the Somme in 1916 at Pozières and Mouquet Farm; Leonard, Edward and Herbert fought around Passchendaele and Amiens and on the Hindenburg Line. 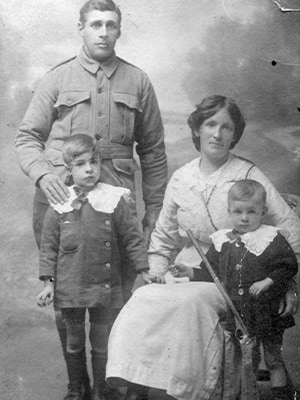 Happily for parents Hannah and James Lovett and their seven other children, all five Lovett brothers survived the war and returned home. Some of their post-war experiences were similar to those of other returned soldiers, but many were very different. In oral history interviews, Frederick Lovett’s sixth child Dr Laura Bell has reflected on her father’s wartime and post-war experiences. She observed that he and his brothers:

...were like any other soldiers that came home. I think my dad never talked about the war. He never talked about it... they lived a tough life over there. They succeeded in what they went for. And they came back here as heroes, to me anyhow. They were protecting the land that they love, and they came back with no idea that they were going to be treated as second-class citizens.

Having achieved a degree of acceptance and equality within the AIF overseas that was much higher than what was available to Aboriginal people in Australian society generally, the Lovett brothers came back to renewed exclusion and disadvantage. Their records of giving service ‘to King and Country’ apparently did not entitle them to receive service in the bars of local hotels alongside other returned soldiers. 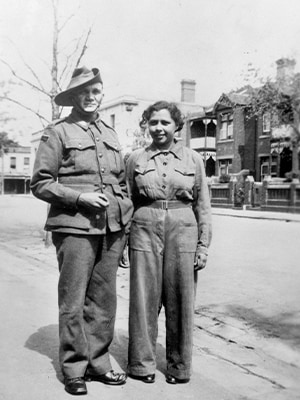 Four of those brothers enlisted again in the Second World War, as did their youngest brother Samuel, along with many of the next generation of the extended family. Among these were the first female members of the family to serve: Alice Lovett, who joined the Women’s Auxiliary Air Force (WAAF) in 1941, and Pearl Lovett, who joined the Australian Women’s Army Service (AWAS) in 1943. One member of the family served with the British Commonwealth Occupying Forces in Japan and three others served in Korea. Alice’s son Mervyn McDonald served and was wounded in Vietnam.

In a bitter irony, when the Aboriginal mission at Lake Condah was subdivided into blocks of land after the Second World War for the soldier settlement scheme, the Gunditjmara people were again dispossessed of their country, and not one of the Aboriginal returned soldiers who applied for a block of land was granted it. In 1946 the Heywood sub-branch of the returned Soldier’s, Sailor’s and Airmen’s Imperial League of Australia had made a request to government that the mission should be:

cut up and given to the Aboriginal and half-caste returned servicemen... as we believe these men should be given the opportunity to settle down and reap the benefits due to them from a grateful country.

One of Frederick Lovett’s grandsons, Ricky Morris, has continued the proud tradition into the 21st century with deployments to East Timor and to Afghanistan. This multi-generational family tradition of military service is thought to be without parallel throughout the nations of the Commonwealth. Twenty-one members of the Lovett family have now served in Australian military forces, and all have survived.

The mutual support given to each other by members of the Lovett family continues to be extended into the wider Indigenous community. In addition to his own active service and time spent in the reserves, Ricky Morris has worked with Australian Defence Force Indigenous recruitment programs on and off throughout his service. In an oral history interview recorded in 2016 he explained that he has worked hard on ‘getting individuals’ careers started in the Defence Force’, and that one of the things he took away from his time as a recruiter is that the disadvantage still faced by many Indigenous people, before and after their military service, means this support is needed. In Ricky’s own words:

In his post-service career Ricky Morris has worked on addressing this disadvantage through formal involvement with Aboriginal housing services and veterans’ groups, and through continuing to support young veterans of the Afghanistan conflict.

Aboriginal family bonds and traditions are similar to those of all Australian families, but differ in important ways that are reflected in the story of the Lovett family. Extended kinship relationships, especially cross-generational, are extremely important for Aboriginal people. Older people are broadly responsible for teaching, supporting and caring for all their younger relatives, not just their own children. Elders are honoured and valued as carriers of knowledge and wisdom. Knowledge of culture, law and ceremony is passed on from older to younger people, and always within the framework of being custodians of country. The Lovett’s have defended their values, their rights and their responsibilities to each other and to the land for many generations and their tradition of service is a powerful expression of this. Dr Laura Bell again:

I think our people, like my dad, they were real strong people, you know? They believed in what they were doing, they believed in themselves, and I think they instilled into our community what it is today, and we still carry on that sort of tradition, how they fought. And I think we’re still fighting.

Dr Laura Carroll is the Education and Volunteer Manager at the Shrine and an Honorary research Fellow at La Trobe University. Laura previously lectured at La Trobe for fourteen years, first in English Literature then in Academic Development.