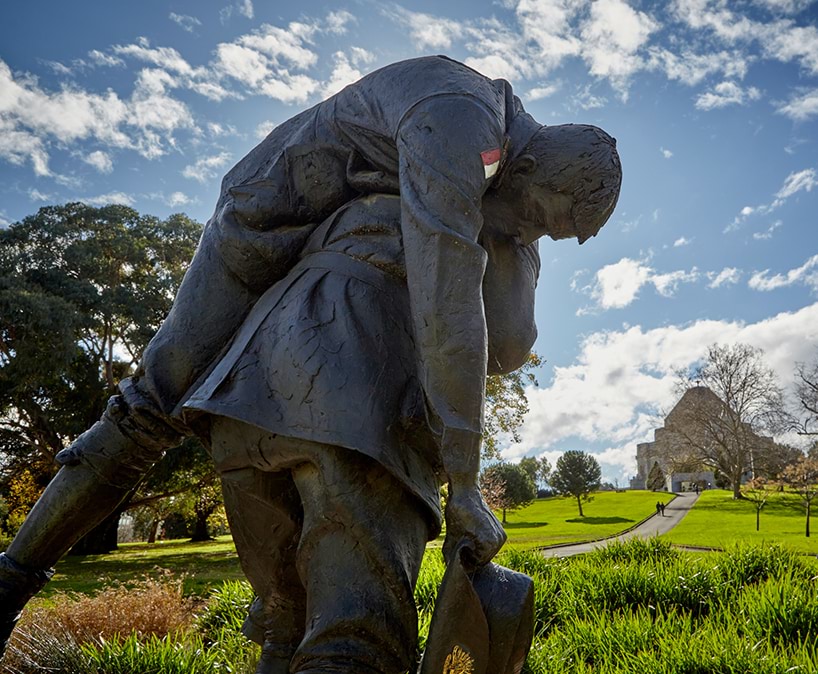 This sculpture called ‘Cobbers’ is a tribute to the men who fought at the Battle of Fromelles in the First World War.

The battle took place on 19 July 1916. It was the first action on the Western Front for the 5th Australian Division. It proved to be disastrous, especially for Victoria’s 15th Brigade, part of 5th Division. They suffered heavy casualties with 1800 men injured. This reportedly brought their commander Brigadier General ‘Pompey’ Elliott to tears.

In the days following the battle, rescuers recovered 300 wounded men from no-man’s-land. As Sergeant Simon Fraser carried a wounded companion from the field, he heard a call for help: “Don’t forget me, Cobber.”

Peter Corlett's original sculpture of Cobbers is in Fromelles, France. This sculpture is cast from the original and was proposed by the Friends of the 15th Brigade. During the casting process, family members threw barbed wire from the battlefield into the molten bronze. This represents a connection between the battlefield, families and the Shrine.

Each year we hold a service at this sculpture to remember those who fought and died in the Battle of Fromelles and all are welcome to attend.

Watch a video about Cobbers

Listen to the podcast "Don't Forget Me Cobber"

Read more about the Battle of Fromelles