Life Governors and Governors assist the Trustees in the conduct of commemorative services. Meet the team: 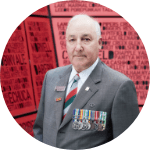 Adrian Lombardo was appointed as a trustee of the Shrine of Remembrance Trustees in 1987 and became a Life Governor in 2001. Conscripted into the Army in June 1965, he graduated from the Officer Training Unit, Scheyville NSW in December that year as an Infantry Second Lieutenant. Adrian served in South Vietnam with the 8th Battalion as a platoon commander and subsequently filled regimental, training and staff appointments in his 23-year Army career. Adrian retired in 1987 as a Lieutenant Colonel. He has been a member of Melbourne Legacy since 2011 and serves on its Investment Committee. 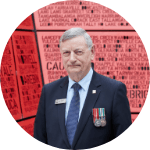 Peter Whitelaw was appointed as a trustee of the Shrine of Remembrance Trustees in 1995 and became a Life Governor in 2001. He graduated as a National Service Second Lieutenant (Army) in 1966 and has served the veteran community in many roles including President of Woodend RSL Sub-Branch, Chair of the Gallipoli Oaks project. Peter was recently awarded RSL Life Membership.

Watch: Reflections of the Life Governors

Recorded in 2021, the Shrine's Life Governors discuss their time in the defence forces and how they came to serve and support the Shrine of Remembrance. Steve Campbell-Wright was appointed as a Shrine Governor in 2016. He has served over 40 years in the Australian Defence Force. Steve has deployed overseas on many occasions, including a recent staff role with the Air Task Group in the Middle East. He holds a PhD in history and cultural heritage and is a published author of Air Force histories. 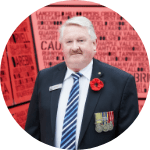 Jason Cooke was appointed as a Shrine Governor in 2019. He has served over 35 years in the Australian Defence Force, currently at the rank of Colonel. Jason has deployed on several domestic operations including the 2009 and 2019 Bushfire Task Forces and the COVID-19 Task Force with the Victorian Aged Care Response Centre. Jason currently works for the Department of Defence as a Deputy Director within the Victorian Barracks Melbourne. He is also President of the Royal Australian Artillery Association of Victoria and is the RSL Anzac Day Chief Marshal. John Coulson was appointed as a Shrine Governor in 2005. He was a member of the Army Reserve for 35 years, retiring as Colonel. John was attached to 5 RAR in South Vietnam in 1967 and the British Army in 1981. In civilian life, John was a teacher, school principal and education consultant. He continues to be active in several veteran and community organisations, in recognition of which he was awarded the OAM. Jan was appointed as a Shrine Governor in 2019. She joined the Women’s Royal Australian Naval Service (WRANS) in 1966 and the Royal Australian Navy Reserve (RANR) in 1980 and was awarded the Federation Star for 40 years’ service. Jan also serves the veteran community in many roles including Treasurer of Naval Commemoration Committee Victoria and Royal Australian Navy Communications Branch, as well as being a volunteer at the Museum at HMAS Cerberus. She is also a trainee Wellbeing Advocate. 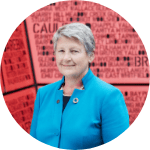 Annette Holian was appointed as a Shrine Governor in 2006. She received a commission in the RAAF Reserves as a consultant orthopaedic surgeon in June 2000. Annette has served in East Timor, the Solomon Islands, Indonesia and the Middle East Area of Operations in peacekeeping, warlike and non-warlike operations and in humanitarian disaster responses. Her current military role is as the Clinical Director for Surgical and Peri-operative Services, RAAF, and Patron of the Catalina association at RAAFA. Matthew Little was appointed as a Shrine Governor in 2022 and served in the Royal Air Force (UK) for 26 years receiving two Air Command commendations in the Queen's New Year's Honours List, before relocating to Australia in 2018. As a senior Director of Music and Commander HQ Music Services within the Royal Air Force, his career was deeply embedded in ceremonial activity, especially in conjunction with HQ London District and tri-service ceremonial command. He is also a highly recognised and experienced professional vocalist and compere, working on large-scale music tours, TV and film on the global stage. 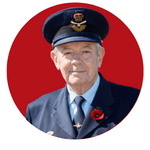 Peter Meehan was appointed as a Shrine Governor in 2022. Peter held the rank of Squadron Leader in the Royal Australian Air Force Specialist Reserve and deployed as media manager on numerous occasions to joint military operations. He served during the International Peacekeeping Force East Timor period as media manager for the Royal Australian Regiment in 1999. As a journalist and broadcaster, Peter came to prominence as a radio host on GOLD FM and 3AW Melbourne ‘talk radio’ during the 1980s and 90s. Peter writes and delivers the Anzac Day Dawn Service at the Shrine as MC. He runs his own corporate communications company and conducts media training and personal presentation skills programs. Mohammed Abdur Rahman was appointed as a Shrine Governor in 2022. Rahman deployed in East Timor in the 6th Battalion, Royal Australian Regiment (RAR) in 2000.

He survived a militia grenade attack in Aidabasalala in East Timor and his experience is archived at the Australian War Memorial and was written into the account in the forthcoming volume of the Official History of Australian Operations in East Timor (Volume ll). Rahman displayed a photographic exhibition in 2005 titled The Journey of an Australian Peacekeeper that was nominated for the UN Media Peace Prize.

Rahman has a postgraduate degree and currently works at Museums Victoria. He is also a Victorian representative for the 6 RAR Association. He is a passionate volunteer, recognised for his 30 years of Community Service (CVS) in 2022 by the Australian Government Department of Health & Aged Care. 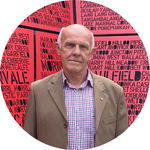 Neil Smith was appointed as a Shrine Governor in 2022. He has served 25 years with the Australian Regular Army in a wide range of positions, including active service in Vietnam with the 8th Battalion, RAR in 1969-70. Following specialist training in ammunition and explosives, he worked with the Army and Australian Federal Police and was stationed in the UK during the Falklands War.

In retirement, Neil has published numerous histories and other works on subjects such as the Boer War, both World Wars and lesser conflicts in Asia. 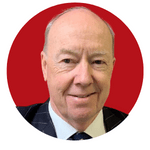 Rowan was appointed as a Shrine Governor in 2022. Since 1998, Rowan has led an annual surgical mission to Ho Chi Minh City in Vietnam, treating cleft and jaw deformity patients. He has been a Defence Force Reservist, Army and Royal Australian Air Force (1979–2020) and served on attachment to the British Army (1981–1982).

In 2002, Rowan was appointed as a Member in the General Division of the Order of Australia for, “services to dentistry as an oral and maxillofacial surgeon, educator and administrator.” He has also been awarded the Reserve Force Decoration with three clasps, the Australian Defence Medal and the Medal for People’s Health from the Government of the Socialist Republic of Vietnam. 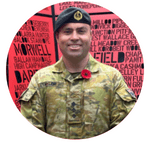 Tyson was appointed as a Shrine Governor in 2022. He graduated from the Royal Military College, Duntroon where he is a current serving Army Captain. Tyson comes from a distinguished military family to which he is one of four father-to-sons to have served and deploy operationally with the Army. He has seen operational service in both Warlike Operations in Afghanistan and humanitarian assistance in supporting the efforts of the Queensland floods, Covid pandemic and bushfires. Tyson is also an Operational Firefighter with Fire Rescue Victoria as an active first responder to emergencies in support of the Victorian community.

The Board of Trustees is responsible for the care, management, maintenance and preservation of the Shrine monument and the Shrine Reserve.

The Executive Team implement strategy and direct the day to day activities of the Shrine.