Flowing from Commonwealth and State flag protocol, there are special rules on what flag is flown and in what position.

The three flagpoles on the eastern side of the Forecourt are all the same height, meaning that the left-hand flagpole holds the most important flag. On most days you will see the Australian national flag flying here. The Victorian state flag will usually fly in the middle. The right-hand flagpole rotates between the flags of the services: Navy, Army and Airforce. On ceremonial days the relevant military unit flag will fly. On most other days, the Aboriginal flag will fly.

If the Shrine is acknowledging the service of an allied nation, the Australian national flag will fly in the middle and the other nation's flags are then placed in alphabetical order from the left pole.

During some services such as Remembrance Day, the flags begin the service at half-mast as a mark of respect. During the service after the minute silence at the first note of the Reveille, the flags will be raised. 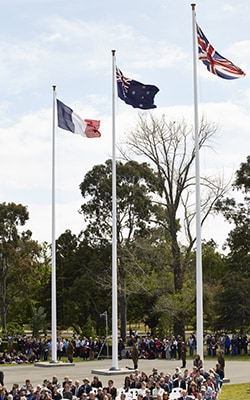